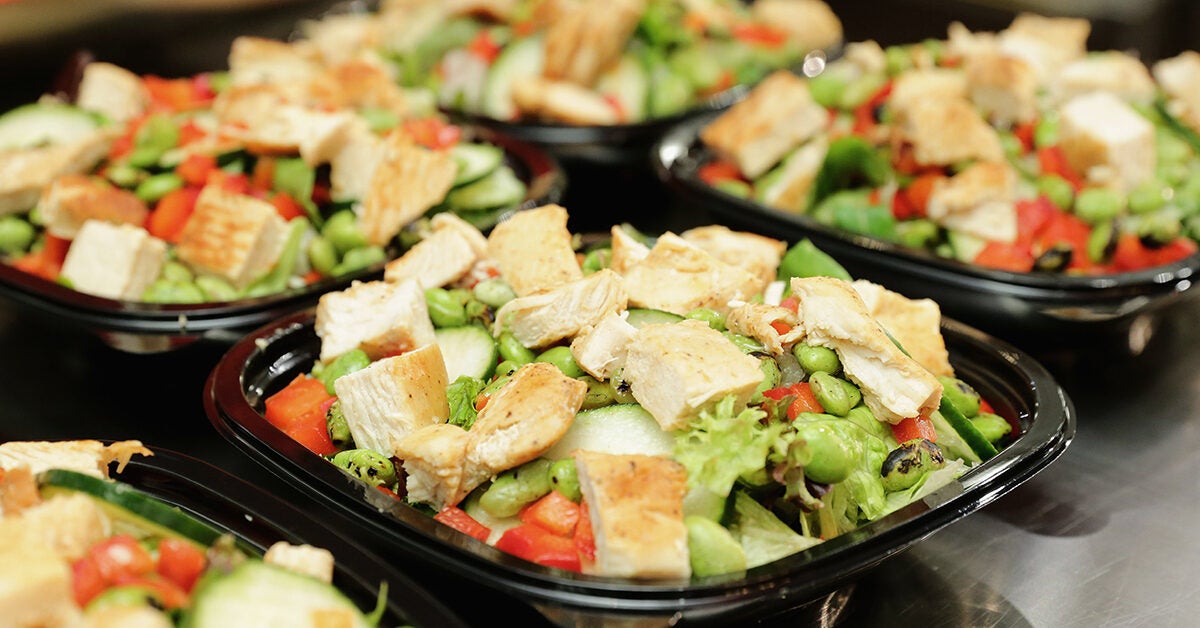 From breakfast dishes to entrées and desserts, almost all the menu items at fast food chains are loaded with salt, making it challenging to find options suitable for a low sodium diet.

However, there are plenty of choices available that are lower in sodium, including several from some of the most popular fast food restaurants.

Though many of these foods shouldn’t be a staple in your diet because they’re still high in calories, carbs, and fat, you can enjoy them as an occasional treat or a convenient option when you’re on the go.

These two breakfast menu options from McDonald’s are suitable if you want to limit your salt intake.

Featuring oatmeal, diced apples, light cream, and a cranberry raisin blend, this meal is a solid, option from McDonald’s that’s lower in sodium.

It contains 150 mg of sodium per serving, or approximately 7% of the recommended Daily Value (DV) (1).

Though it’s relatively high in carbs and sugar, it also provides 4 grams of fiber per serving and can help increase your intake of key nutrients, like iron and potassium (1).

Hotcakes are one of the most popular breakfast items on the menu at McDonald’s. They’re also a choice that’s lower in sodium, with 550 mg of sodium per serving — that’s 24% of the DV.

In addition to sodium, the hotcakes contain higher counts of carbs, fat, and sugar. However, they also provide several important nutrients, including calcium, iron, and potassium (2).

Try reducing your portion size to limit your sodium intake, and be sure to skip the salted whipped butter. Taking these steps will bring the total amount down to 480 mg, or 21% of the DV, for all three hotcakes (2).

Wendy’s offers two options that are relatively lower in sodium.

This classic side dish is one of the simplest options available at Wendy’s, with just 40 mg of sodium per serving, or approximately 2% of the DV (3).

It also packs a hearty chunk of potassium, iron, and fiber per serving, along with 7 grams of protein (3).

You can order a plain baked potato and add your own healthy toppings, like herbs and veggies, or try the Sour Cream and Chive Baked Potato, which contains just 55 mg per serving, or around 2% of the DV (4).

Though the salads at Wendy’s are some lower salt options available from this restaurant chain, most are still very high in sodium.

If ordered as-is, the Southwest Avocado Salad is made with romaine lettuce, cheese, avocado, grilled chicken breast, and bacon and contains 930 mg of sodium, or 40% of the DV (5).

However, if you remove the bacon, the sodium content decreases to 790 mg, which is 34% of the DV. If you also make it meatless by removing the grilled chicken, the total sodium drops to 350 mg (15% of the DV) per serving (5).

You can find a few savory and sweet options at Taco Bell that are lower in sodium.

Most soft tacos available from Taco Bell are relatively low in sodium.

For example, the Black Bean Soft Taco contains about 370 mg of sodium per serving, or about 16% of the DV. It also provides several important nutrients, including 4 grams of fiber and 6 grams of protein (6).

Other add-ons you can use to customize your taco include onions, tomatoes, and jalapeño peppers.

However, keep in mind that the sodium content can stack up quickly if you’re ordering multiple tacos. So be sure to moderate your intake and pair your taco with other side dishes that are lower in sodium.

This sugary cinnamon treat is one of the lowest sodium options you can order at Taco Bell, with just 115 mg of sodium, or 5% of the DV (8).

Although Cinnamon Twists are not particularly nutrient-dense, they’re relatively low in calories, with 170 calories per serving (8).

For a simple side dish that’s lower in sodium next time you’re at Taco Bell, skip the nachos, quesadillas, and cheesy potatoes, and consider opting for black beans with rice instead.

Made with seasoned rice and black beans, each serving provides 360 mg of sodium, which is approximately 16% of the DV (9).

It also contains 4 grams of protein and fiber, plus it has just 160 calories per serving (9).

A few potential menu options from Jamba Juice are lower in sodium.

Featuring fresh fruit and an array of toppings, like granola, peanut butter, or shredded coconut, all the bowls from Jamba Juice are lower in sodium.

Here is the sodium content for a few flavors of smoothie bowls (10):

Though some can be somewhat high in carbs and sugar, they’re also a good source of fiber, protein, and potassium (10).

Not only is it a good source of protein and calcium, but it’s also one of the foods with the lowest sodium on the menu at Jamba Juice, with 480 mg per serving, or 20% of the DV (11).

You can customize salads and tacos at Chipotle for a lower sodium option.

Chipotle’s salads swap the rice and tortillas for a supergreen blend, making them one of the lower sodium options available.

For instance, a salad with chicken, fajita vegetables, pinto beans, and sour cream contains about 715 mg of sodium, or 31% of the DV (12).

Meanwhile, a veggie salad with black beans, guacamole, sour cream, and fajita vegetables provides around 775 mg of sodium, or 34% of the DV (12).

Because the tacos at Chipotle can be easily customized to fit your dietary needs and preferences, it’s easy to switch up the fillings to lower the sodium content.

For example, a chicken taco with a crispy corn tortilla, romaine lettuce, sour cream, fajita vegetables, and black beans contains 233 mg, or 10% of the DV (12).

You may want to consider these two lower sodium options at Subway.

Unlike many other Subway sandwiches — which pile on sauces, meats, and cheeses that are higher in sodium — the Veggie Delite is relatively lower in sodium. It packs just 320 mg in a 6-inch (15-cm) sandwich. That’s 14% of the DV (13).

Made with lettuce, baby spinach, red onions, tomatoes, cucumbers, and green bell peppers on multigrain bread, this sandwich is also a good source of protein, vitamin A, and vitamin C (13).

Swapping the sandwich for a salad is a great way to reduce your sodium intake when ordering from Subway.

For example, the Tuna Salad contains just 390 mg of sodium per serving, which is equivalent to about 17% of the DV (14).

It also packs 15 grams of protein, thanks to the tuna, and is loaded with vitamin A, vitamin C, and iron (14).

Starbucks offers two breakfast options that are lower in sodium.

These egg bites are a protein-rich breakfast option you can grab with your morning coffee next time you’re at Starbucks.

They are also slightly lower in sodium than the other varieties of egg bites offered by Starbucks, including the Bacon & Gruyère Egg Bites and Egg White & Roasted Red Pepper Egg Bites, which contain 680 mg (30% of the DV) and 470 mg (20% of the DV), respectively (16, 17).

Made from whole grain oatmeal and your choice of toppings — such as dried fruit, nuts, brown sugar, or blueberries — this hearty option is versatile, delicious, and lower in sodium.

This menu item is also lower in calories and rich in key nutrients, like fiber and protein (18, 19).

This fast food chain offers two potential options that are lower in sodium.

This popular side dish from Burger King is filled with jalapeños and cheddar cheese.

Though it’s deep-fried and may not be the best choice when it comes to heart health, it’s lower in sodium than many other menu items, with 454 mg (20% of the DV) in each 4-piece serving (20).

If you’re limiting your sodium intake, the chicken nuggets from Burger King are a much better option than the restaurant’s burgers and sandwiches.

In addition to being relatively lower in sodium, the 4-piece chicken nuggets also provide 9 grams of protein and contain less than 200 calories per serving (21).

A couple of sweet treats from Sonic are lower in sodium.

The French Toast Sticks from Sonic may interest you if you’re following a low sodium diet. They contain 460 mg (20% of the DV) per serving, which is lower than other menu items (24).

Keep in mind that they are still fairly high in carbs and sugar, especially if you’re pairing them with maple syrup. However, they also contain 8 grams of protein and 3 grams of fiber in each serving (24).

Surprisingly, many desserts from fast food restaurants are packed with sodium, which can make it tricky to satisfy your sweet tooth while watching your sodium intake.

Although most fast food menu items are loaded with salt, there are many options that are lower in sodium.

Be sure to enjoy these foods in moderation, as most are still high in fat, calories, or added sugar.

You should also pair these foods with a well-rounded diet to keep your sodium intake in check and ensure you’re meeting your nutritional needs.