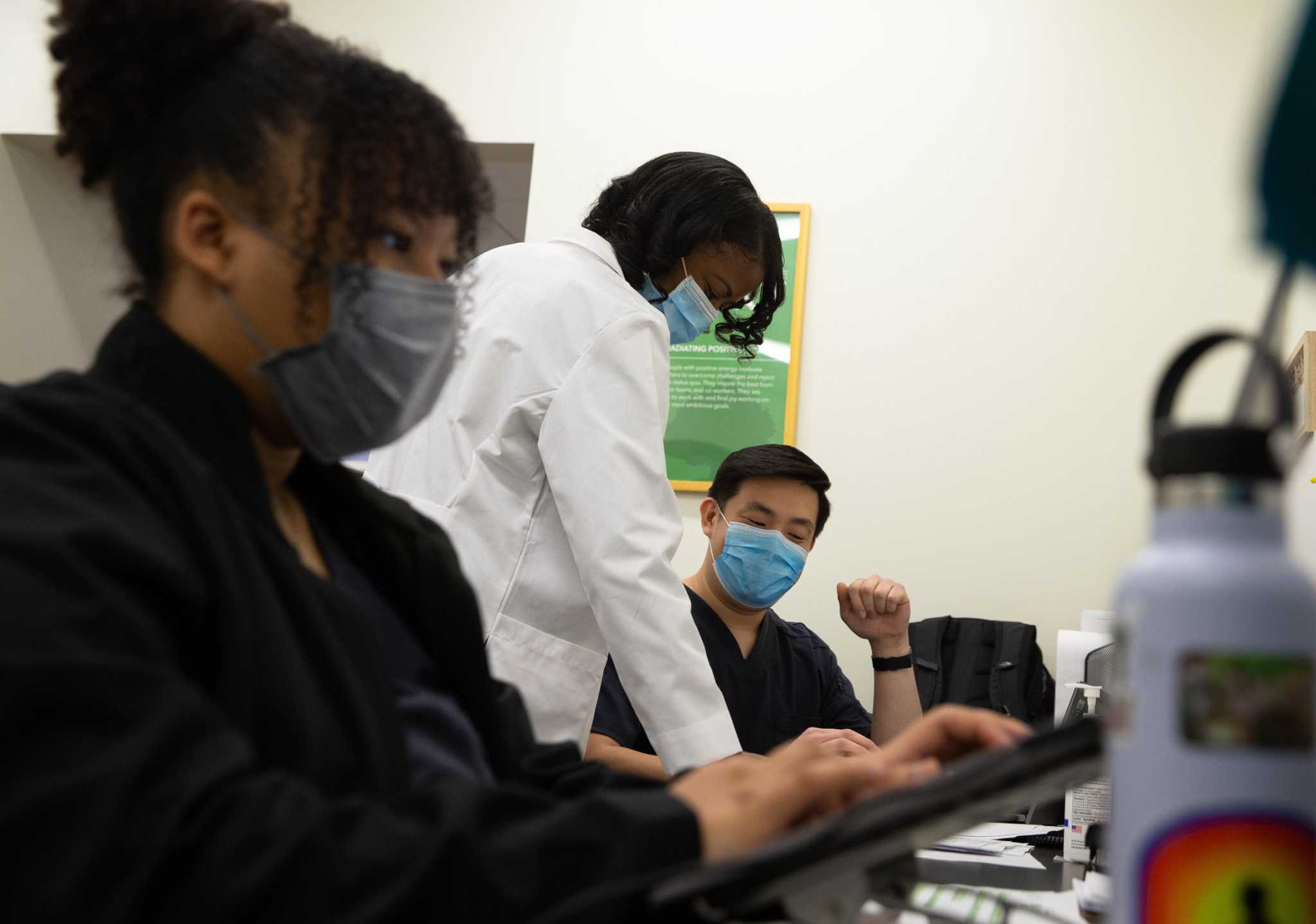 Iliana Oberkircher can’t quite recall how old she was. Maybe 10? But she clearly remembers holding an orange pill bottle, doing her best to translate the prescription from English to Spanish for her mother.

The medicine was for her younger brother, Juan Carlos or “Carlitos,” who suffered from a complex heart condition, requiring her mother to shuttle him from doctor to doctor in the Rio Grande Valley, Oberkircher always came along to translate.

“Looking back now,” Oberkircher said, “having a Latino physician who spoke Spanish was just unheard of.”

Today, Oberkircher is a student at the University of Houston College of Medicine, but Hispanics, as well as other minorities, remain woefully underrepresented among physicians — a legacy that has contributed to higher incidences of disease and mortality rates among racial and ethnic minorities. Hispanics, for example, account for 40 percent of the Texas population, but only 10 percent of the state’s primary care physicians.

A growing body of research shows patients tend to have better trust and communication with doctors of the same race or ethnicity, and people of color are also likely to experience racism in the health care system. Now, a new survey overseen by a Baylor University Medical Center physician, has found that those who experience such racism are more likely to put off treatment, not make a follow-up appointments or otherwise delay care.

Join the conversation with HouWeAre

We want to foster conversation and highlight the intersection of race, identity and culture in one of America’s most diverse cities. Sign up for the HouWeAre newsletter here.

Those decisions to delay or forego treatment, in turn, may contribute to the higher incidences of chronic disease and health problems among minorities. People of color experience higher rates of diabetes, obesity, stroke, heart disease, and cancer than whites, according to Health Affairs, a peer-reviewed journal based in Washington.

On HoustonChronicle.com: Texas ranks among worst in the nation for racial health disparities

Oberkircher can’t help but think of her brother who had four open heart surgeries before he died at 12, and the lack of prenatal care that her mother received. She wonders whether her brother would have been born with a heart defect had her mother been told — or understood — what she should do during pregnancy, such as taking iron and folic acid to prevent iron deficiencies and birth defects.

“There’s definitely somewhere where the system failed us a little bit,” Oberkircher said. “Especially being in a situation where my mom didn’t completely understand what his condition was.”

Dr. Jessica Shepherd, an obstetrician-gynecologist at Baylor University Medical Center, has heard stories like these over a 15-year career. She became curious about how patients responded to doctors who couldn’t speak their language or made assumptions based on their race and whether it might create a chilling effect that disrupts care.

Shepherd helped launch a survey of 1,000 Black Americans and 1,000 white residents, and published the results in February on Verywell Health, a wellness site fact checked by medical professionals. The survey found about one in three Black respondents reported experiencing racism while using the health care system.

“To me, we have so much literature and data on how health care bias and racism is seen in health care,” Shepherd said. “The more focal part (of the survey) is what people decide to do with those actions.”

In Verywell Health’s national survey, about 36 percent of the respondents who said they experienced racism in the health care system decided to see another provider. Twenty-eight percent said they delayed making a health decision, such as getting preventative screening, while another 28 percent said they didn’t make follow-up appointments. Nearly one-fourth, or 24 percent, said they stopped getting treatment after encountering racism.

Delaying treatment or foregoing follow-up appointments can have serious consequences, keeping patients from getting needed medications and allowing illnesses to progress until they become emergencies — or worse.

Black residents account for about 12 percent of the U.S. population, but only about 5 percent of physicians, according to a study last year from the University of California at Los Angeles. In Verywell Health’s survey, only one in four Black Americans reported seeing a Black doctor, and only half said they felt that their last provider was familiar with Black patients.

One of her patients, a Black woman, had seen several doctors, all of whom recommended kidney dialysis, but the woman refused. The other physicians had written her off as a difficult patient, but Abioye was able to build a connection, learning why the woman was resisting treatments.

The woman had lost a loved one shortly after they began dialysis, leading her to equate dialysis with a death sentence. After Abioye explained that the woman’s loved one probably waited too long, and dialysis could add years to her life, the woman agreed to begin treatment.

Black patients “just tend to open up more which leads me to provide more effective care for them,” Abioye said. “If I can get more information from them and better understand their history, I can take care of them in more comprehensive and holistic way.”

A history of mistrust

Experts say this lack of Black and minority doctors reinforces mistrust of a health care system that has a history of racist practices, including experimentation on Black and enslaved people for research without their consent.

One infamous experiment was done by J. Marion Sims, who conducted gynecological surgeries on enslaved women without anesthesia or their consent in the mid-1800s in Montgomery, Ala. One woman was operated on 30 times between 1846 and 1849.

Almost a century later, the federal government allowed hundreds of Black men in rural Alabama go untreated for syphilis for 40 years for research purposes. About 600 Black men who took part in the study thought they were receiving treatment, but physicians lied about the nature of the study, and never told the participants they were only receiving placebos.

Even after penicillin was discovered as a cure for the venereal disease, about one-third of the men were left to suffer with the disease, which if left untreated leads to blindness and mental impairment.

These examples are often cited as reasons why Black Americans remain skeptical of the health care system, often hesitating to make routine doctor’s visits, and most recently, refusing COVID-19 vaccinations. When the vaccine rollout began, Black people and people of color had the lowest vaccination rates due to lack of access and skepticism of the vaccine.

The gap has narrowed since then. In a survey conducted in March of 14,000 people 82 percent of Black adults 18 and over reported they were fully vaccinated, compared to 85 percent of whites, 86 percent of Hispanics and 97 percent of Asians, according to the Centers for Disease Control and Prevention.

A patient, who is a Nigerian immigrant, came for a checkup. Agwuncha and her instructor asked the woman if she wanted a COVID shot.

The woman hesitated, explaining she heard all sorts of rumors on the vaccine from social media and worrying that “the white man wanted to put a chip” in her.

Agwuncha caught the woman eyeing her name badge. “I’m Nigerian, too,” Agwuncha told her. As the two talked, they discovered they were both part of the Igbo tribe. Then the woman asked Agwuncha: “Well, did you get it?”

Agwuncha told her she did. The woman ultimately decided to get vaccinated.

“I didn’t want to shame her or negate what she had to say, but just kindly reorient her to better resources,” Agwuncha said. “I said, ‘You know, I got it and my (instructor) got it and we’re both women of color.’”

Hope for the future

Part of the solution to stopping racist practices in health care is to ensure that more minorities are represented in executive suites, research labs, insurance companies and doctors’ offices, Shepherd said.

“What we need to understand is that the fundamentals of medicine need to change,” Shepherd said.

Oberkircher said she feels hopeful that this can happen. She’s enrolled at the University of Houston College of Medicine, which has focused on preparing primary-care doctors to practice in under-served urban and rural areas of Texas, and training doctors who look like the communities they serve. The school launched in 2020 with the aim of enrolling 50 percent of its students from minority populations.

“Before applying, I was surprised how most medical schools aren’t representative of their community,” Oberkircher said. “I think what we’re doing here is really going to make a difference.”