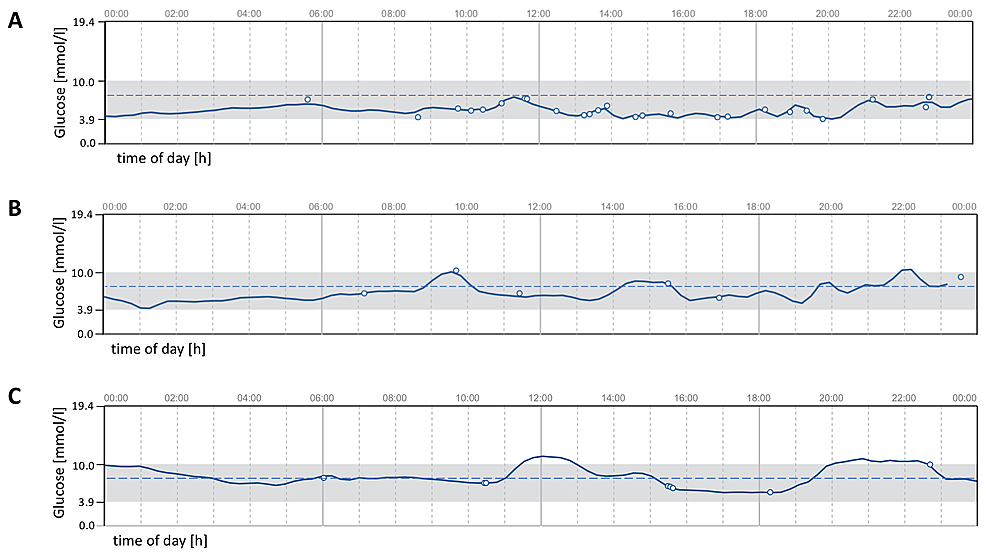 In the DiRECT study, remission of type 2 diabetes was defined as glycosylated hemoglobin (HbA1c) of less than 48 mmol/mol (6.5%) in the absence of glucose-lowering medication. Reaching this target of partial remission in a large percentage of study participants was a great success. Nevertheless, this remission target falls short of normalization of plasma glucose in real life and thus of a state in which glucotoxicity and beta cell stress would be minimized. Such a normalized state, however, seems necessary for the long-term maintenance of metabolic health. In contrast, partial remission to a prediabetic state is probably set up for failure and rapid reoccurrence of type 2 diabetes [9].

Currently, different devices permit obtaining a real-life glucose profile. Some transmit data continuously, while others rely on intermittent scanning. All, however, measure subcutaneous, interstitial glucose levels in short intervals. These devices are already established as valuable tools to guide insulin therapy. They provide detailed insights into glycemia that go beyond the information obtained by punctual plasma glucose measurements or HbA1c [10]. Additionally, a normal range for real-life glucose profiles has now been established through the study of healthy populations [11].

Given this level of development of continuous monitoring, real-life glucose profiling could be an ideal tool to evaluate the extent of type 2 diabetes remission. In this pilot trial, we, therefore, attempted to provide proof of concept that complete remission of type 2 diabetes related to metabolic syndrome to the point of a normalized real-life glucose profile can be achieved.

The monocenter lifestyle intervention study PiREM (“Pilot study for individualized REMission induction of type 2 diabetes”) was conducted at the diabetes center of the University Hospital, Ludwig-Maximilians-Universität (LMU) Munich, Germany. Participants were recruited between January and June 2020 through the local diabetes outpatient clinic as well as through advertisements on public transport and online diabetes information portals.

Eligible participants were 18 to 64 years old, had been diagnosed with type 2 diabetes within the previous six years, suffered from metabolic syndrome, and were motivated to participate in the lifestyle intervention. The diabetes diagnosis had to be confirmed by an HbA1c ≥ 48 mmol/mol (6.5%) plus one elevated blood glucose value (fasting glucose ≥ 7.0 mmol/l, random blood glucose ≥ 11.1 mmol/l, or 2-hour glucose in an oral glucose tolerance test ≥ 11.1 mmol/l). Furthermore, the glucose profile at baseline had to be diabetic (at least two time points with fasting sensor glucose ≥ 7 mmol/l or any sensor glucose value ≥ 11.1 mmol/l).

Written informed consent was obtained from all participants and the protocol was approved by the Ethics Committee of the Ludwig-Maximilians-Universität (project number: 19-182). The study was preregistered at the German Clinical Trials Register (drks.de; study ID: DRKS00020453).

The study was designed as a single-arm pilot trial to test the feasibility of complete diabetes remission, defined as a normalized real-life glucose profile, after lifestyle intervention. The intervention period lasted six months. In one case, it was prolonged to nine months due to study interruption and in one case, it was concluded after five months due to personal reasons.

The primary study endpoint was the degree of improvement of glucose metabolism at the post-intervention visit. Complete remission was defined as normalization of the real-life glucose profile without glucose-lowering medication over at least five days (see below for further details). In case no real-life glucose profile could be obtained, an HbA1c value of less than 39 mmol/mol (5.7%) plus a fasting plasma glucose less than 5.6 mmol/l without glucose-lowering medication were accepted as an alternative definition. However, this alternative definition of complete remission did not have to be applied. Partial remission was defined as an above-normal real-life glucose profile but an HbA1c in the prediabetic range of 39-47 mmol/mol (5.7-6.4%) without glucose-lowering medication.

In weekly in-person visits during the first two weeks of the intervention, a study physician assessed the participants’ motivation, adherence to the diet, blood glucose profile, weight, exercise patterns, and possible side effects. After that, contacts were every other week in person or via telephone.

For participants with type 2 diabetes related to metabolic syndrome, all with a BMI ≥ 25 kg/m2, the lifestyle intervention started with a very-low-calorie formula diet (Optifast 800® or Optifast Professional®, Nestlé Health Science, Vevey, Switzerland, respectively; 815-865 kcal per day, distributed over five ratios of 163-173 kcal per day, 34-46% carbohydrates, 32-36% protein, 7-11% fat, and 5-7% fiber) for one to three months, depending on the individual progress. Only vegetables with negligible calorie content were permitted in addition to the formula diet. Participants were also advised to drink at least two liters of water or unsweetened tea per day to prevent constipation, which had been described previously in similar trials [8,12]. Further, participants were asked to monitor their plasma glucose and blood pressure. Glucose-lowering and blood pressure-lowering medications were reduced as indicated.

After a maximum period of three months, regular food was reintroduced, accompanied by regular nutrition counseling. The aim was to reach a maintenance diet that permitted further gradual weight loss or was at least isocaloric with an approximate composition of 25% carbohydrates, 25% protein/fat, 40% vegetables, and 10% fruits [13]. Besides nutrition counseling, participants were coached regarding physical activity, exercise, psychology, and behavior change. To support physical activity, pedometers were distributed. The exercise target was at least 150 minutes of moderate-intensity activity per week, preferably combined with muscle-strengthening activities [14].

Height, waist circumference, and hip circumference were measured using a measuring tape to the nearest 0.5 cm. Body weight and body fat percentage were determined by bioelectrical impedance analysis (Tanita BC-418, Tanita Corporation, Tokyo, Japan). Resting systolic and diastolic blood pressures were obtained on both arms in a seated position and the mean out of two measurements on the arm with the higher systolic pressure was recorded.

Study participants were invited to participate in a whole-body MRI to determine pancreatic and hepatic fat levels via a low-fat fraction map technique (3 Tesla System, Ingenia or Achieva, Philips Health Care, Best, Netherlands). The MRI study protocol has been described in detail previously [15]. For two participants, baseline MRI data were missing due to scheduling conflicts.

Insulin secretory reserve was tested in an arginine stimulation test. The test protocol was adapted from Teuscher et al. [16] and Robertson [17]. Subjects with glucose-lowering medication were asked to pause their pharmacological treatment from the evening before testing. The stimulation test started after an overnight fast of at least eight hours. Fasting samples of plasma glucose and insulin were drawn, before a bolus of arginine (5 g arginine HCl, given as a 0.29 mol/l solution; B. Braun Melsungen AG, Melsungen, Germany) was injected over 60 seconds with time 0 set at the beginning of the injection. Further blood samples for insulin measurements were drawn at 2, 3, 4, 5, 6, 8, 10, and 15 minutes. The acute insulin response to arginine (AIRArg) was calculated as the mean of the three highest insulin levels obtained within five minutes after the start of arginine injection minus the pre-stimulus insulin level [18,19].

To obtain a real-life glucose profile, a FreeStyle® Libre 2 device (Abbott Diabetes Care, Alameda, CA, USA) was used for 2-14 days at a time. The sensor was inserted into the upper arm adipose tissue.

Interstitial glucose values were measured every minute and stored in the sensor memory every 15 minutes. For validation, occasional capillary plasma glucose measurements were implemented. Participants were advised to scan their sensor at least every eight hours to avoid losing any values stored in the sensor’s temporary memory. However, they were not supposed to use the sensor values to guide any lifestyle decisions.

Reference values for a normal real-life glucose profile have been published previously by Shah et al. [11]. According to this publication, we classified a profile as normal when glucose concentrations remained between 3.9 and 7.8 mmol/l at least 96% of the time. To display and analyze the real-life glucose profiles, we used the web-based diabetes management system LibreView® (Abbott Diabetes Care, Alameda, CA, USA), and the glucose values were stored in the sensor memory every 15 minutes.

Ten participants with type 2 diabetes related to metabolic syndrome were included in this study. The participants’ median age was 52 (43-56) years, they had a median BMI of 33.1 (32.1-37.7) kg/m2, and the median time since diagnosis was 1.5 (1.1-5.3) years (Table 1). Of these 10 participants, seven completed the study. Two dropped out due to unwillingness to follow through with the nutritional program and one because of a long-term stay abroad.

Complete remission: normalized real-life glucose profile (in the normal range 96% of the time) without medication over at least five days. Partial remission: real-life glucose profile in normal range less than 96% of the time and HbA1c 39-47 mmol/mol (5.7-6.4%) without medication. Improved type 2 diabetes: improved HbA1c and unchanged or reduced glucose-lowering medication.

Figure
1:
Exemplary real-life glucose profiles of participants with (A) complete and (B) partial diabetes remission or (C) an improved type 2 diabetes at the post-intervention visit.

Table
3: Comparison of pre- and post-intervention measurements in the participants who completed the study. 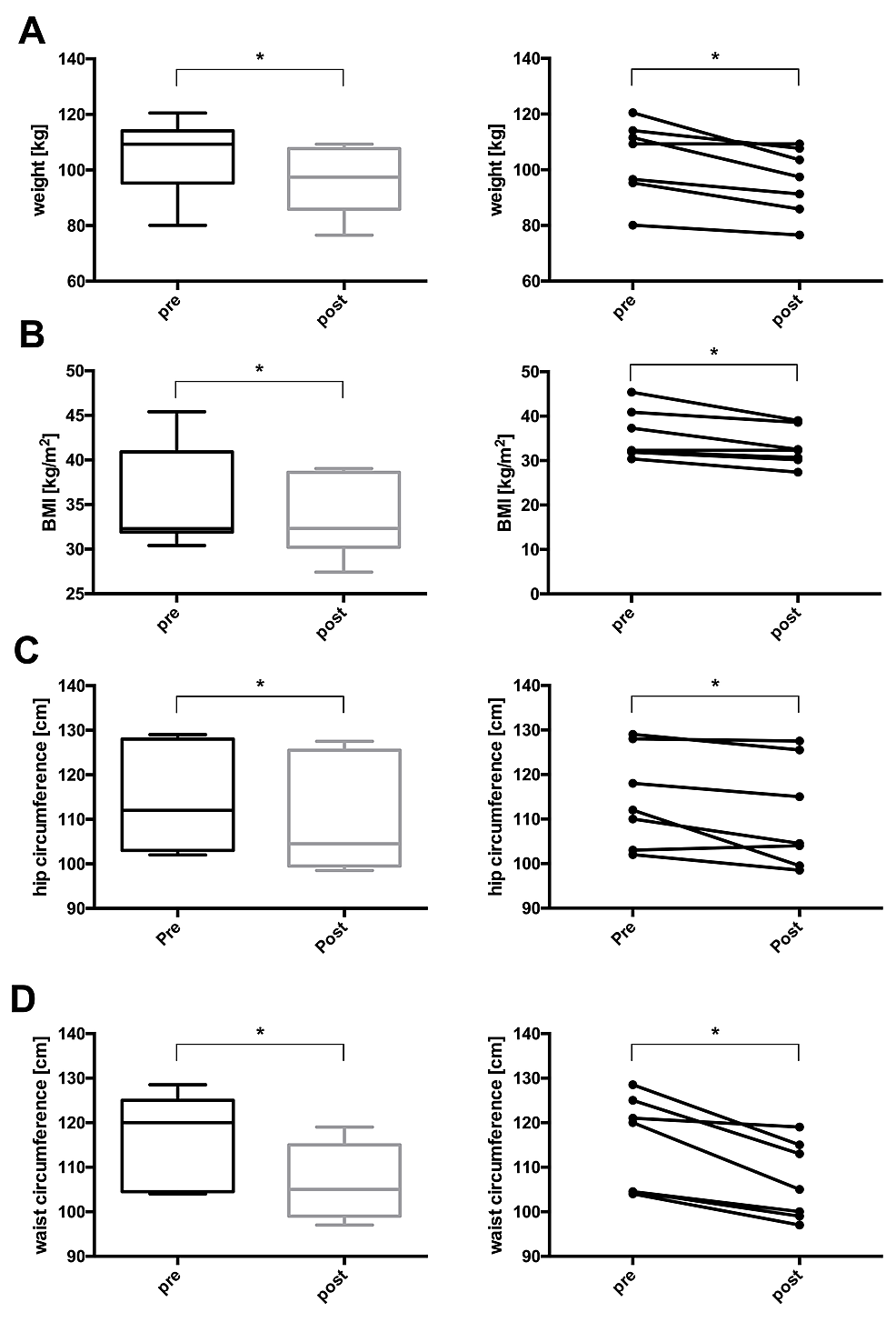 Figure
2:
Changes in (A) weight, (B) BMI, (C) hip circumference, and (D) waist circumference before and after lifestyle intervention.

Left panel (A-D): boxes represent the first quartile to the median and the median to the third quartile. Whiskers extend to the minimum and maximum values. Right panel (A-D): individual participants before and after the intervention. Note that not all y-axes start at 0. * P < 0.05. 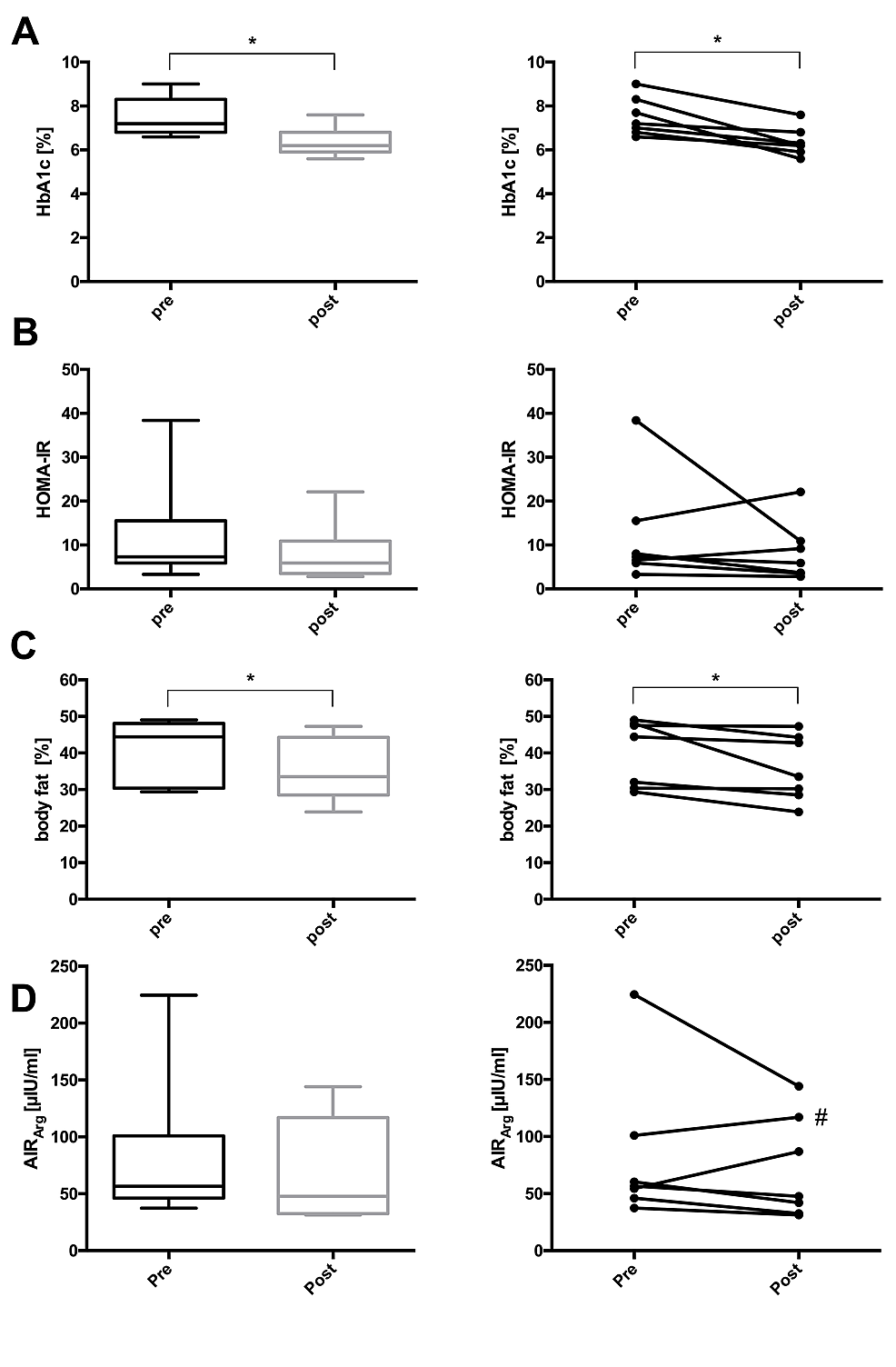 Figure
3:
Changes in (A) HbA1c, (B) HOMA-IR, (C) body fat, and (D) acute insulin response to arginine (AIRArg) before and after lifestyle intervention.

Left panel (A-D): boxes represent the first quartile to the median and the median to the third quartile. Whiskers extend to the minimum and maximum values. Right panel (A-D): individual participants before and after the intervention. * P < 0.05; # arginine stimulation test under medication (metformin). 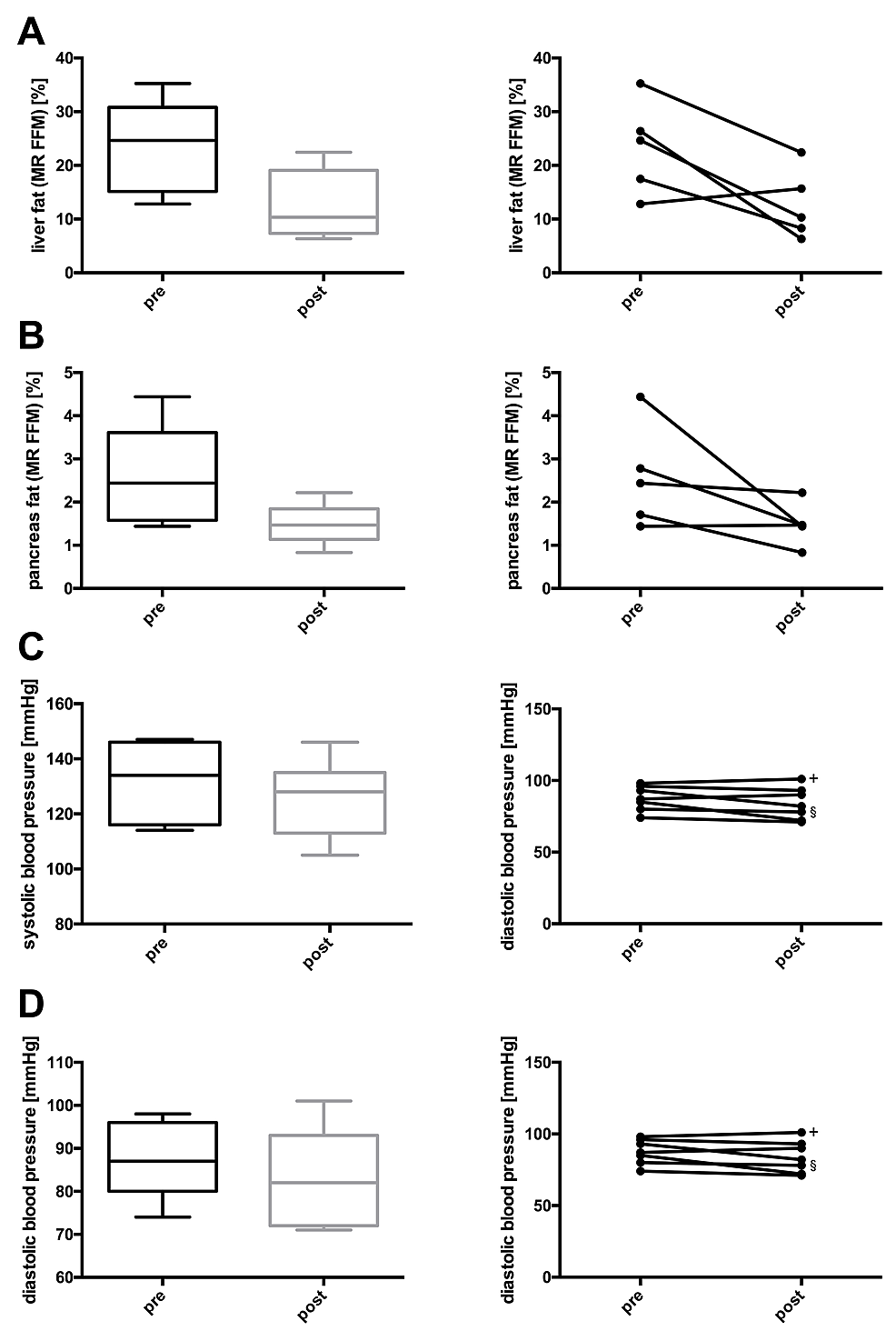 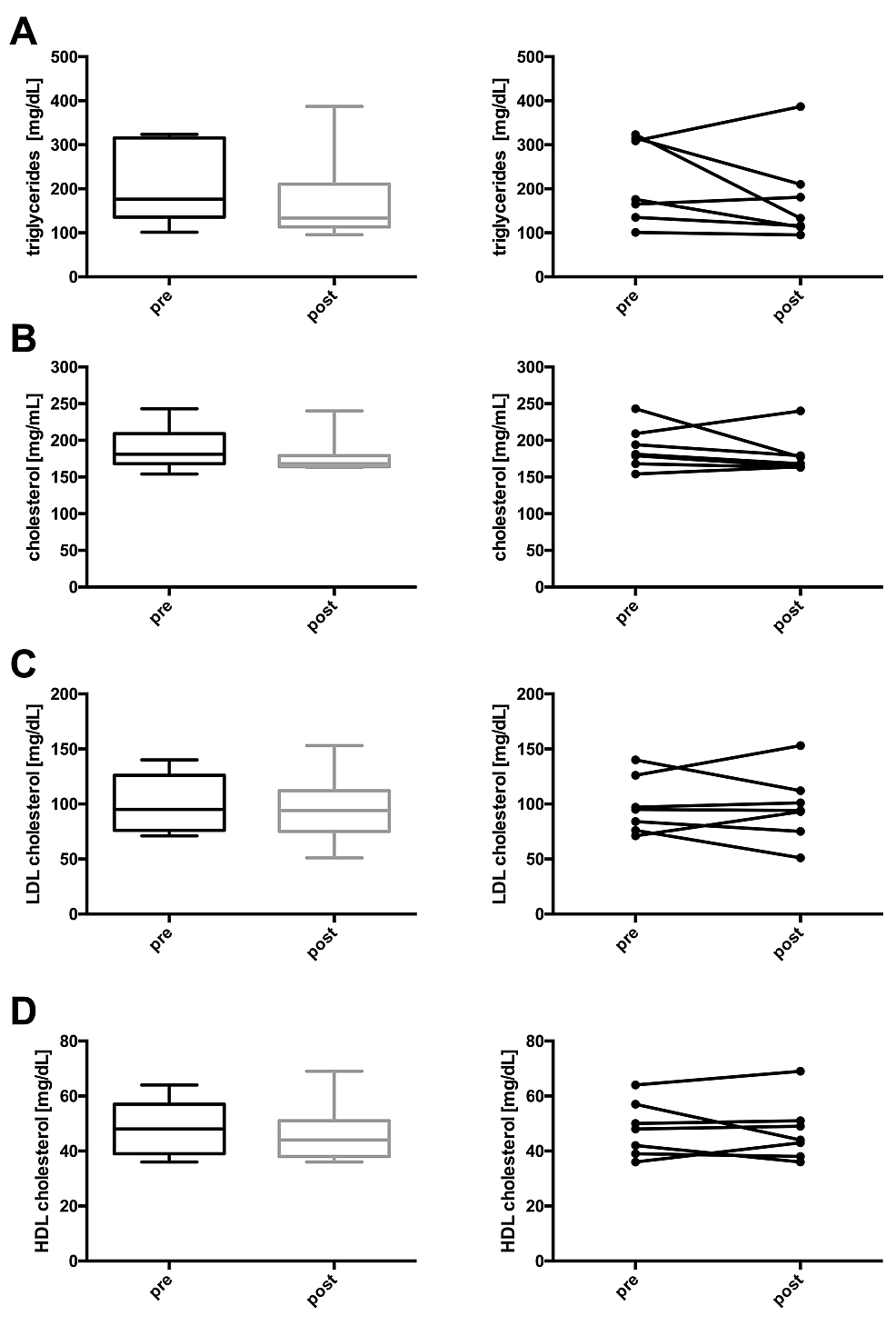 Left panel (A-D): boxes represent the first quartile to the median and the median to the third quartile. Whiskers extend to the minimum and maximum values. Right panel (A-D): individual participants before and after the intervention. * P < 0.05.

This pilot trial demonstrates that complete remission of type 2 diabetes related to metabolic syndrome to the point of a normalized real-life glucose profile is, in principle, possible through lifestyle intervention. However, this trial also illustrates that fully effective lifestyle change is difficult to achieve.

We consider the trial results a sufficient proof of concept for our hypothesis despite the fact that only one out of 10 participants reached the set remission target. This participant had been diagnosed with type 2 diabetes 1.4 years before study entry and had a baseline HbA1c of 51 mmol/mol (6.8 %) while taking metformin as glucose-lowering medication. Therefore, we believe that truly complete remission of established type 2 diabetes occurred in this case. Furthermore, three other trial participants reached partial remission with real-life glucose profiles in the normal range of 60-85% of the time.

As in previous studies, glycemic improvement in our trial was linked to weight loss, a reduction in hip and waist circumference, and whole-body, liver, and pancreas fat [7,21,22]. Due to the small sample size, not all of these changes were statistically significant, but the trends nevertheless appeared clear. Additionally, we observed other expected benefits of weight loss and lifestyle change, such as trends toward lower blood pressure and reduced serum triglycerides.

As in most lifestyle intervention trials, success in weight loss and glycemic improvement was variable between participants, despite intensive and individualized counseling [23]. This observation highlights the need for further improvements in intervention protocols for the induction of type 2 diabetes remission. We also want to reiterate that our findings and those of previous trials [7,8,21,24] only concern type 2 diabetes related to metabolic syndrome, not unrelated type 2 diabetes subtypes [1]. In those subtypes, remission by lifestyle change may be illusive or, at least, effective approaches have not been found yet.

The main limitation of our study was its small sample size. Nonetheless, we could demonstrate that complete remission of type 2 diabetes to the point of a normalized real-life glucose profile is possible in principle. Moreover, every participant completing our intervention improved his or her glycemic status and gained health benefits. Another limitation of our study was that we could not obtain baseline MRI data from two participants. Given the already small sample size, this missing data are probably responsible for the non-significant results regarding ectopic fat in the liver and pancreas despite the importance of these fat depots, which has been demonstrated in previous remission trials [7,21,22].