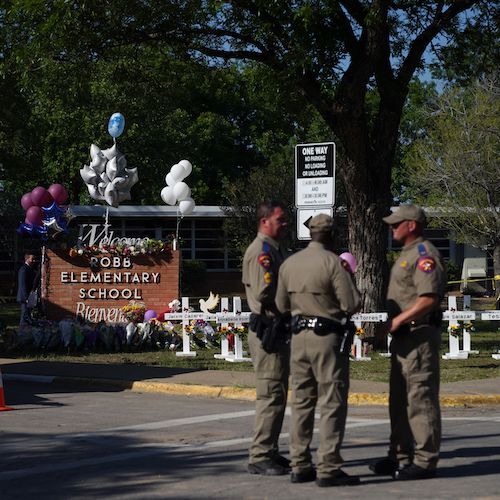 In the wake of mass shootings in Buffalo, New York, and Uvalde, Texas, some officials have cited mental illness as a reason for the unprovoked attacks. But as we’ve explained before, having a mental illness isn’t predictive of who will perpetrate a mass shooting.

Back in 2019, we answered a reader question about the relationship between mental illness and mass murder, following two mass shootings in Texas and another in Ohio. At the time, then-President Donald Trump suggested mental illness was one of the primary culprits. “Mental illness and hatred pulls the trigger, not the gun,” he said during a televised address following two of the shootings, which occurred over the same weekend.

Once again, there is another set of mass shootings — and politicians are making similar claims. On May 24, an 18-year-old killed 19 children and two teachers at an elementary school in Uvalde, Texas. A week and a half before, another 18-year-old killed 10 people at a grocery store in Buffalo, New York, in a racially motivated attack.

In a speech at the National Rifle Association convention in Texas on May 27, Trump again focused on the role of mental health in mass shootings.

“While we don’t yet know enough about this week’s killing, we know there are many things we must do. We need to drastically change our approach to mental health,” he said, adding, “And clearly we need to make it far easier to confine the violent and mentally deranged into mental institutions.”

When asked about gun laws, Texas Gov. Greg Abbott also brought up mental health in a press conference the day after the Uvalde massacre, even as he acknowledged that the shooter did not have a known history of mental illness.

“We, as a state, we, as a society, need to do a better job with mental health,” he said, adding, “Anybody who shoots somebody else has a mental health challenge, period.”

As we explained in our article, people with mental health disorders are more likely than those without such conditions to commit acts of mass violence, but many mass shooters do not have mental illnesses. It has not been shown that mental illness is the primary cause of mass murder.

Abbott’s belief that anyone who commits a mass shooting must have a mental health problem is common — but one experts told us was flawed.

“No one who commits a violent act is mentally well,” Beth McGinty, a mental health and substance abuse policy researcher at Johns Hopkins University, told us, drawing a distinction between mental illness and mental wellness. But that doesn’t mean that the person meets the criteria for a mental illness or that treatment would have eliminated that person’s violent act. “Improving the mental health system is a really important goal,” she said, but “it’s not going to make a significant dent in mass shootings or interpersonal violence writ large.”

Rather than focusing on mental health diagnoses, experts suggest paying attention to disturbing behavior, as the best predictor of violent behavior is prior violent behavior.

You can read more in “The Facts on Mental Illness and Mass Shootings.”