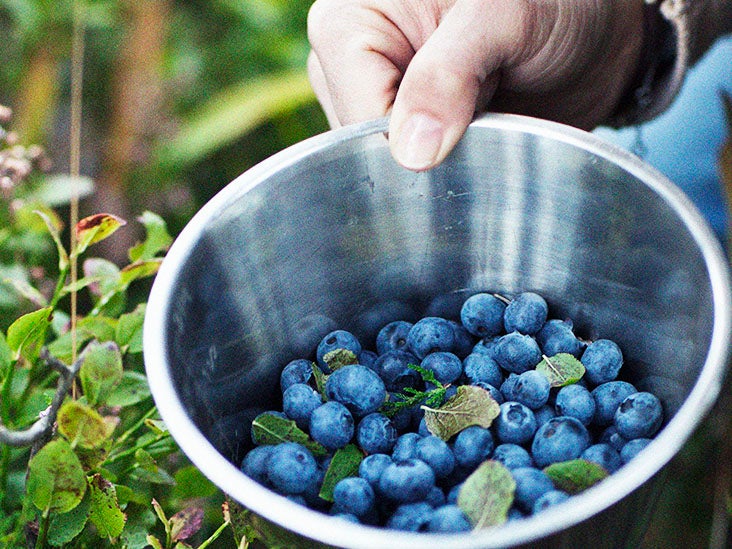 Bilberry is a fruit similar to the blueberry and full of many nutrients and beneficial compounds, such as vitamin C. However, research is ongoing into the reputed health benefits of bilberries, including whether they help with inflammation and protect against cancer.

They are an easy fruit to add to the diet, without many drawbacks. And while people can take bilberry supplements, the efficacy and dosage of this fruit require more research to establish.

Read on to learn the potential benefits of bilberries and how to add them to the diet.

Bilberry is a plant native to northern Europe, and it is also known as the European blueberry, whortleberry, dyeberry, huckleberry, and blaeberry. Its botanical name is Vaccinium myrtillus L.

Bilberry fruits are similar in appearance to a North American blueberry. They are small and round and feature a deep purple color.

Bilberries are rich in a chemical called anthocyanin, which gives them their color. Health experts also believe they offer many .

Retailers often sell bilberries fresh, frozen, or whole dried berries, and people can find them in the form of preserves, jams, and juices.

There are numerous reported benefits of consuming bilberries and bilberry products, including the below.

Bilberries are high in a chemical called anthocyanins. The usual daily dietary intake of anthocyanins is approximately (milligrams). The total anthocyanin content of bilberries is typically between 300 and 700 mg per 100 grams (g) of fresh fruit, depending on several factors.

May help protect against cancer

The body contains a number of chemicals called “free radicals,” which can harm the cells. They may several health issues, including cancer. In laboratory and animal studies, researchers found that antioxidants helped tackle the effects of these free radicals. However, more studies are necessary to confirm the cancer-fighting effects of antioxidants, and by extension, bilberries, in humans.

suggests bilberries could help fight inflammation. Anthocyanins are antioxidants with anti-inflammatory properties and are plentiful in bilberries.

A found that people who drank bilberry and red grape juice daily had measurable improvements in the biomarkers of inflammation and tissue damage across 9 weeks.

Practitioners have used bilberry as a herbal remedy to reduce blood sugar in people with type 2 diabetes.

More state that bilberry extract may be effective at lowering blood sugar levels in individuals with type 2 diabetes.

Another found that consuming bilberries leads to increased insulin secretion, suggesting that the fruit may help manage diabetes. However, more research is necessary to establish its potential applications.

More recently, a found that taking 480 mg of bilberry extract every day reduced the symptoms of eye fatigue, such as eye pain, eye heaviness, uncomfortable sensation, and foreign body sensation.

This suggests that more research is necessary, but the results are promising.

May reduce risk of heart issues

Health experts speculate that the consumption of fruits and berries containing high levels of polyphenols may . Bilberries contain , so they likely have this effect.

It is important to note that the following studies are small scale, may not have had a placebo group, or may not have involved humans. Therefore, more evidence is necessary before researchers can draw any conclusions regarding the benefits of bilberries.

However, research into the following other health benefits of adding bilberries to the diet is ongoing:

Many people in the United States take vitamins or supplements in a multitude of forms.

According to the , supplement manufacturers will typically suggest a recommended serving size, but this may differ from what a person’s doctor recommends.

The recommended daily dose of bilberry supplements varies greatly. One study suggests variations between of dried berries or between 160 and 480 mg of powdered extract per day. Another recommends taking once or twice daily. Therefore, it is difficult to know how much is appropriate as a daily dose without discussing things with healthcare professionals.

Additionally, some supplements can cause side effects in high doses or without medical advice. They can also interact with certain medications — a doctor can advise on these interactions.

Therefore, it is important to speak with a healthcare professional before taking any supplements to ensure there are no interactions with any other medications.

There are many ways of adding bilberries to the diet. They feature a slightly more intense flavor than a blueberry, so people may eat them raw in the same way.

Individuals may also use bilberries in place of blueberries in any recipes that call for the latter.

For example, a person can use them by:

As well as the fresh or dried bilberries, people may locate bilberry supplements in powdered capsule or liquid form in their local health stores and through online retailers.

However, it is likely that the broadest benefits come from eating the whole fruit, as it probably contains nutrients not found in supplement form, such as fiber.

Bilberries are a versatile fruit that people can use in many of the same ways as blueberries.

The fruit may offer many different health benefits, but further research is necessary to establish the certainty of these claims.

It is worth noting that there is no downside to eating bilberries in their natural form. Still, people should discuss taking bilberry supplements with their doctor to ensure they avoid any interactions with other medications.