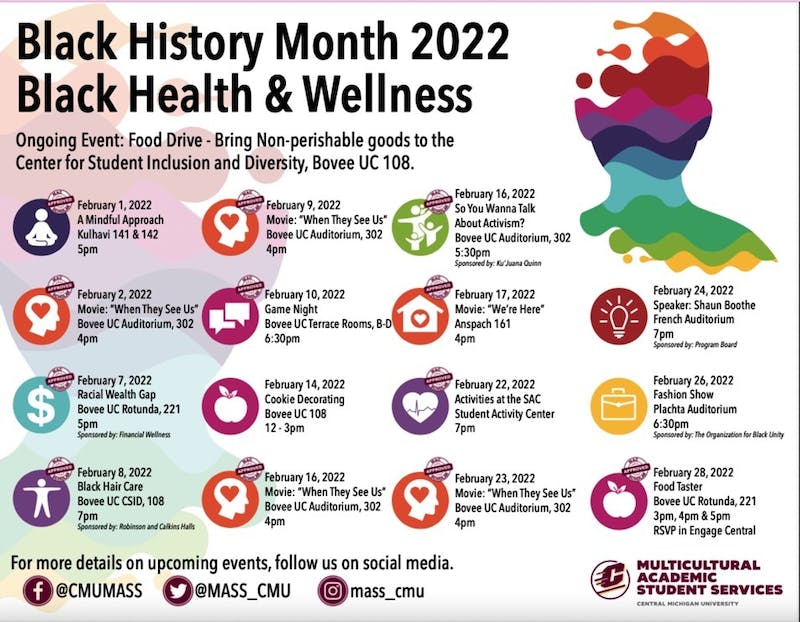 Fifteen events throughout February will include movie viewings, guest speakers and informational sessions.

While the Black health and wellness theme is set by the Association for the Study of African American Life and History (ASALH), MASS Interim Assistant Director Wade Tomson said the events have an intentional message.

“We kind of follow what the national theme is,” he said. “For us, we chose to look at it from a wellness wheel perspective.”

“A Mindful Approach,” will kick things off as a two-part event beginning at 5 p.m. on Feb. 1 in Kulhavi Hall Rooms 101 and 102. In the first half, a representative from the Central Michigan University Counseling Center will discuss stigmas of mental health, and the value of having somebody to talk to.

In the second part, a yoga and mindfulness expert will talk about exercises students can use to relax, “so they can show up in class at their best levels,” Tomson said.

Based on true events, the movie follows five Black and Latino teenagers who were convicted of raping a white woman in Manhattan in 1989. Known as the Central Park Five, the men were exonerated in 2002, after serving years in prison, when DNA evidence confirmed their innocence.

“It’s very powerful,” Tomson said. “There’s a lot to unpack with this and I’ve heard that some of the sections are very, very heavy and can cause a pretty strong reaction. So (we wanted) to give students some space to fully embrace one and then be prepared for the next one.”

The event at 5 p.m. on Feb. 7 called “Racial Wealth Gap,” will be sponsored by Financial Wellness Collaborative. Participants will discuss the history behind the racial wealth gap, what causes it and what can be done to end it.

“We have to first address how we got there in the first place,” Tomson said.

“Black Hair Care,” will start at 7 p.m. on Feb. 8 and discuss various approaches to care for black hair as an extension of a project started last year.

“It’s such a constantly revolving topic,” Tomson said. “We started an initiative in our office last semester where we helped the retail vendors order some haircare products for the university markets. So, if you’re in the East or the Towers markets, there’s actually haircare products made with Black hair in mind.”

The rest of the events are listed in the photo above.

MASS is also collecting non-perishable goods for an ongoing food drive at the Center for Student Inclusion and Diversity in the Bovee University Center 108.