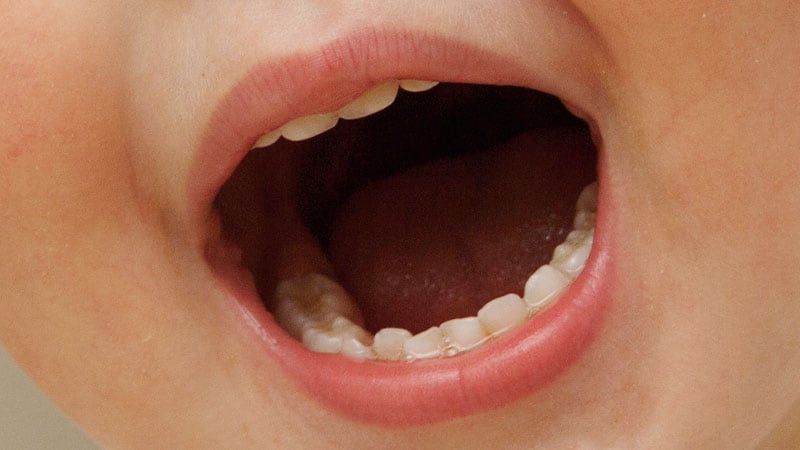 Researchers have identified a potential cause of molar hypomineralization (MH), or “chalky teeth,” an underrecognized condition affecting 1 in 5 children worldwide. The discovery could lead to preventive medical therapies to reduce dental caries and extractions, they said.

According to a team led by biochemist Michael J. Hubbard, BDS, PhD, a professor in the Faculty of Medicine, Dentistry and Health Sciences at the University of Melbourne, Australia, the “groundbreaking” research found that the failure of enamel to adequately harden is associated with exposure to serum albumin while teeth are developing. The blood protein “poisons” the growth of mineral crystals rather than injure the cells that deposit enamel, they reported.

The investigators, who included researchers from Chile, said their findings hold promise for better clinical management of MH and open a new door into research on the broader pathogenesis and causes of the condition.

“We hope this breakthrough will eventually lead to medical prevention of MH, prompting global health benefits including major reductions in childhood tooth decay,” they write in an article published online December 21 in Frontiers in Physiology.

Chalky teeth, characterized by discolored enamel spots, are not merely a cosmetic problem. The condition can lead to severe toothache, painful eating, tooth decay, and even abscesses and extractions. Although its triggers have eluded dental research for a century, Hubbard’s group said fossilized blood proteins such as albumin in the tooth appear to be at least one cause.

Biochemical evidence indicates that serum albumin surrounding developing teeth is normally excluded from enamel, Hubbard said in an interview. “Given that albumin binds strongly to hydroxyapatite-based mineral and blocks its growth, we infer that the epithelial barrier — the enamel-forming cells termed ameloblasts and normally responsible for excluding albumin — must break down in places in response to medical triggers.”

This breach enables localized infiltration of albumin, which then blocks further hardening of soft, immature enamel, leading to residual spots or patches of chalky enamel once the tooth eventually erupts into the mouth. “In other words, we infer that chalky enamel spots coincide with localized breaches of an epithelial barrier that are triggered by yet-to-be determined systemic insults,” he said.

Joseph Brofsky, DMD, section head of pediatric dentistry at North Shore LIJ Cohen Children’s Medical Center of New York, in Queens, agreed that the definitive cause of MH has evaded identification for a hundred years. However, he expressed skepticism about the fossilized blood protein hypothesis.

“That’s a long shot. It’s a possibility, and I’m not ruling it out, but we’re not 100% sure,” Brofsky, who was not involved in the research, said.

In Brofsky’s experience, MH is somewhat less prevalent in the United States, affecting about 1 in 10 children here, which is about half the global rate. “But it’s a problem, and we wish it would go away, but before we know beyond a reasonable doubt what causes this condition, it’s going to be hard to stop it.”

Most cases of MH involve hypomineralization of the 6-year molars, the first adult molars to erupt, but the process starts at birth. “For 6-year molars, normal hardening of dental enamel takes place from the early postnatal period through infancy,” Hubbard said.

The 2-year and 12-year molars are affected about half as frequently as their 6-year counterparts, “so this extends the medical-risk window out to early school days, and slightly back to the perinatal period for the 12-year and 2-year molars, respectively,” he said.

A critical question is which childhood illnesses are most likely to set the stage for MH, he added. “Forty-plus years of epidemiology have failed to nail a specific cause or causal association. But given the high prevalence of MH — 20% in otherwise healthy kids — naturally we suspect some common illnesses are the culprits,” he said. “But which diseases, which medications, and which combinations?”

Hubbard’s advice to pediatricians is to be alert to MH: “If you’re inspecting a child’s throat, then why not look at their back teeth, too ― particularly when they’re getting their new molars at 2, 6, and 12 years?”

The study was supported by the Melbourne Research Unit for Facial Disorders Department of Pharmacology & Therapeutics, Department of Paediatrics, and Faculty of Medicine, Dentistry and Health Sciences at the University of Melbourne. The authors and Brofsky have disclosed no relevant financial relationships.

Diana Swift is a medical journalist based in Toronto.