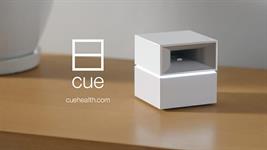 What Cue Health’s Super Bowl ad lacked in visual celebrity appeal, it made up for in star power. With the spot, which featured the voice talents of Israeli actress Gal Gadot, the molecular diagnostics firm sought to leverage the advertising world’s biggest stage to generate instant awareness.

It’s hard to become a household name overnight, obviously. So in the event you didn’t Google the company following the airing of the Super Bowl ad, or are just curious about what else this upstart health-tech firm is all about, then this primer is for you.

Cue Health makes rapid COVID-19 tests for use by professionals and consumers and a system that allows results to be read on a mobile phone. Its test was developed with assistance from the Biomedical Advanced Research and Development Authority.

The point-of-care version won emergency use authorization from the U.S. Food and Drug Administration in June 2020. Less than a year later, the agency authorized the molecular test for at-home use without involvement from a healthcare provider.

That same month, the company closed a $100 million Series C funding round, including investment from Johnson & Johnson Innovation and others. Later in the year the U.S. government awarded the diagnostics maker $481 million to scale up production and distribute millions of its rapid COVID-19 molecular tests as part of the national pandemic response.

Cue Health went public last September, trading under the ticker symbol “HLTH” on the NASDAQ exchange. Initially priced at $16 per share, it closed at $10.50 on Monday afternoon.

After using Cue Health’s testing system to operate its player safety “bubble” during the 2019-2020 and 2020-2021 seasons, the NBA named Cue its official COVID-19 at-home and point-of-care test for the 2021-22 season. Cue Health has promoted the partnership in a recent ad with Minnesota Timberwolves player Karl-Anthony Towns Jr.

Cue Health began selling its molecular COVID-19 test directly to consumers in November. Its kit includes a wand for sample collection from the nose and a test cartridge, which connects to a mobile app.

The test, which uses the RNA method of detection, can confirm the presence of genetic material from the SARS-CoV-2 virus from a nasal swab. It delivers results directly to a smartphone, via the app, in about 20 minutes.

Cue Health aims to usher in more diagnostic assays, including for respiratory illnesses, sexual diseases and cardiometabolic health. All of these will be compatible with the same platform. As part of a promotion, prior to the Super Bowl the company lowered pricing on its testing platform and on memberships to its Cue+ service, which adds the ability to connect with a doctor 24/7 in-app to interpret test results.

As a company best known as a test provider, Cue Health wanted to generate awareness of the full range of its home healthcare capabilities.

While med-tech firm Hologic’s big-game spot with Mary J. Blige and Planet Fitness’s commercial with actress Lindsay Lohan traded on star power to draw attention, Cue Health’s ad opens with a mother talking about COVID testing with her son in a nondescript kitchen.

The spot, produced with Doner LA and dubbed “Meet Cue,” stands out for other reasons. Cue Health enlisted Gadot to provide voice talent for the ad.

“I’m Cue, and I’m here to protect the family,” Gadot announces to the home’s existing digital assistants. The other smart home devices – which include a smart speaker, security camera and robot vacuum – are initially wary. They eventually “warm up to Cue,” in the words of the connected thermostat. After all, she’s there to protect the family’s most valuable asset: its health.

All three health and wellness advertisers were new to the Super Bowl – as were around 40% of the total Super Bowl ads this year per NBC – but Cue represented the broadcast’s only COVID-related spot. The average 30-second ad this year went for a reported $6 million, and some 30-second commercials cost a record $7 million.

Cue Health’s 30-second commercial placed second among all Super Bowl advertisers in terms of how well it drove people to search and engage with the brand online. It performed 22.5 times better than the median Super Bowl ad, according to consumer search data from Edo.

As for Cue’s fellow health and wellness advertisers, neither placed within the top 10 in viewer engagement. The Lohan ad did claim sixth place on Edo’s top-10 list of celebrity appearances that drove consumers to engage with advertising brands online.

The firm is reportedly intent on using TikTok for that purpose. Asked about future partnerships, a Cue Health spokesperson referred reporters to its existing press statement.

This story first appeared on mmm-online.com.