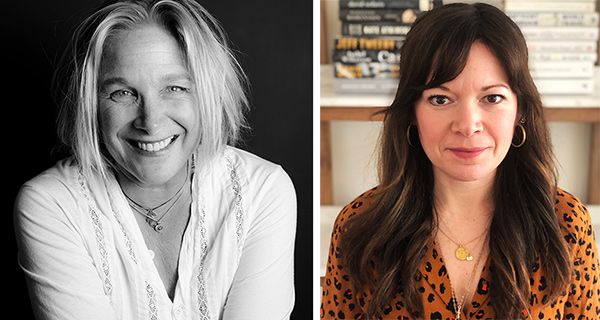 Karen Rinaldi and Julie Will, both publishing veterans with deep experience in health, wellness, and lifestyle titles, were restless a decade ago. “I was leading Rodale,” Rinaldi recalled. “I was 50 and my attorney asked me, ‘What do you want to do when you grow up?’ I knew I wanted to get close to the books again.”

That’s when Rinaldi left her post as publisher and general manager of Rodale for HarperCollins and recruited Will, her friend and former Rodale executive editor, to join her. Together they set out to disrupt “the old paradigm of diet-and-workout books,” Will said.

The two women offered HarperCollins “something it was missing: an imprint with a broad-based lifestyle and health focus,” Rinaldi said. Their vision became HarperWave, with the tagline, “Unexpected perspectives on mind, body, and soul.” The imprint was announced in October 2012 with Rinaldi as senior v-p and publisher and Will as v-p and editorial director. Its first title was published in April 2013.

Creating an imprint gave Rinaldi and Will the infrastructure advantages of an established operation while allowing them creative freedom, they said. Rinaldi, a surfer, chose the name Wave to convey energy and connection; there’s never just one wave. The duo is particularly proud of building a community of staff (up to 10 people now) and authors who support and learn from one another. “We wanted to collaborate with experts and thinkers who are all pushing the limits in their fields of work and study—from researchers and MDs to top journalists,” Rinaldi said.

Wellness has been a top of mind topic during the Covid crisis, and between HC’s 2019 fiscal year and fiscal 2021, sales at HarperWave rose 10%. Its lists run to 25–30 titles per year, with 22 planned, so far, for 2023. Along with surgeons and scientists, psychologists and physicians, the imprint’s list also has chefs. Before her time at Rodale, Rinaldi was managing director and publisher of Bloomsbury USA, where she published the late Anthony Bourdain’s breakthrough book, Kitchen Confidential, in 2000.

Will is also a food and cookbook lover, and cookbooks account for 15%–20% of HarperWave’s list each year, including this year’s The Big Texas Cookbook, coming out in November. It’s the second of four titles HarperWave is publishing with Texas Monthly magazine. The imprint is also publishing four titles with Garden & Gun, another boutique lifestyle magazine, and there are already 500,000 copies in print of that series.

“Both of these franchises are an obvious fit for the lifestyle side of our list, but I think there’s a deeper connection too,” Will said. “These are magazines with a strong brand identity and very carefully curated content—they embody a kind of boutique sensibility that aligns with our approach to publishing.”

Celebrities are in the HarperWave mix, as well. One of HarperWave’s first 2013 titles, purchased at auction, was The Body Book by actor Cameron Diaz, which now has 600,000 copies in print, according to the publisher. “She wanted to do something that aligned with the ethos of our imprint,” Will said. “Diaz wanted to write a book about women’s bodies—a science book, not a diet book—that empowered women to live their best lives and make their healthiest choices.” It became a #1 New York Times bestseller.

Among the nearly 200 titles published since HarperWave launched, 28 have made the Times list, and two others reached #1. Psychologist Nicole LePera’s self-empowerment bestseller How to Do the Work, released last year, will get a follow-up workbook in December, titled How to Meet Your Self, with a 200,000-copy announced first printing. And veterinarian Karen Shaw Becker, with coauthor Rodney Habib, took a health-and-wellness approach to canines in last year’s The Forever Dog, which has 130,000 copies in print. Harper-

HarperWave authors also include several BIPOC and LGBTQ authors. “We are asking questions about wellness for everybody, and you do that by listening to a lot of different voices,” Rinaldi said.

Will added, “We are always looking for innovation, for people starting new conversations.”

Looking ahead, Will has high expectations for a new work from journalist Angela Garbes, whose first HarperWave title, 2019’s Like a Mother, was described in PW’s review as offering “up-to-date, well-substantiated information about women’s physical and mental health, aiming to help readers reduce their anxiety and make truly informed choices” during pregnancy. Garbes’s viral New York magazine cover story in February 2021, about how the pandemic was devastating many women’s lives, prompted her May book Essential Labor: Mothering as Social Change (100,000-copy announced first printing). Will said the book looks at “how we undervalue mothering and caregiving in our society, even though it’s the economic engine that keeps society running.”

Many of HarperWave’s titles have first printings of 100,000–150,000 copies, but Rinaldi is excited about smaller launches, as well. She highlighted breakthrough ideas in Hidden Brilliance (2023), which has a 30,000-copy announced first printing. It’s by child psychiatrist and autism expert Lynn Kern Koegel, with author Claire LaZebnik. “Koegel says we fail collectively in medicine and in education to recognize there is often a hidden intelligence and innate talent in people who are on the autism spectrum,” Rinaldi explained. “This book seems like a paradigm shift in approaching care and treatment.”

She added, “We are always trying to stay true to our mission, to put out a good book that’s influential. I would love to go more into the spiritual from all points of view. We do have a Peruvian medicine man’s book on our fall list. One of our most popular books was by [rabbi and scholar] Joseph Telushkin. Going forward, I’d like to pursue where spirituality intersects with neuroscience.”

A version of this article appeared in the 03/28/2022 issue of Publishers Weekly under the headline: HarperWave Rides Wellness Surge