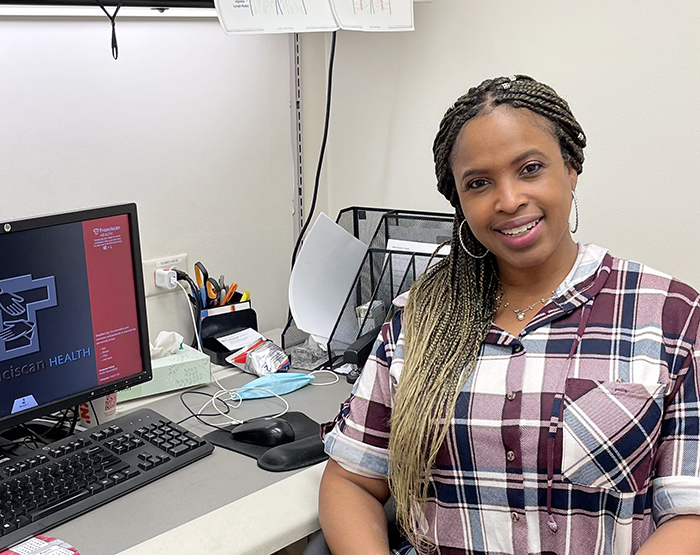 Davenport, a 53-year-old auto mechanic, underwent triceps tendon reattachment surgery on Nov. 12 to repair an injury suffered in a bicycle accident. He had lost strength in his arm, and he was unable to bend his elbow properly.

Davenport, a mechanic at Goodyear in Tinley Park, said he works on commission and his body needs to be in tip-top shape. His injuries greatly reduced his ability to do his job.

Davenport said when he started occupational therapy with Palmer, he was planning to go for only two sessions.

“I really didn’t believe in therapy because I work out in the gym,” Davenport said. “I was like ‘it’s just some exercises and different stuff.’ I go to the gym. I know how to work out. I can do this. I don’t need nobody’s help.”

“Miranda was very knowledgeable. […] I knew she knew what she was talking about,” Davenport said. “Over time, I was glad to go. I was looking forward to going because I knew it was getting me to where I needed to be.”

Davenport was confident he was ready to return to work in mid-March.

Occupational therapy begins with an evaluation that includes examining the amount of swelling, range of motion and pain levels, Palmer said. She then establishes a therapy plan, including exercises and frequency. Treatment includes both at-home therapy and sessions with Palmer at Franciscan Health.

In her profession, Palmer said the word “occupational” doesn’t just refer to someone’s job. It means “who you are and what you do on a daily basis,” Palmer said. “That can mean dressing yourself. That can mean combing your hair or brushing your teeth. Putting on your clothes. Driving. […] it’s everything you do, that you need to do and you love doing.”

Palmer said she also has a special certification for treating lymphedema.

According to the Mayo Clinic, “lymphedema refers to tissue swelling caused by an accumulation of protein-rich fluid that’s usually drained through the body’s lymphatic system. It most commonly affects the arms or legs, but can also occur in the chest wall, abdomen, neck and genitals.”

Not all therapists hold this certification. Palmer earned hers after seeing breast cancer patients whose arms were swollen because of lymphedema.