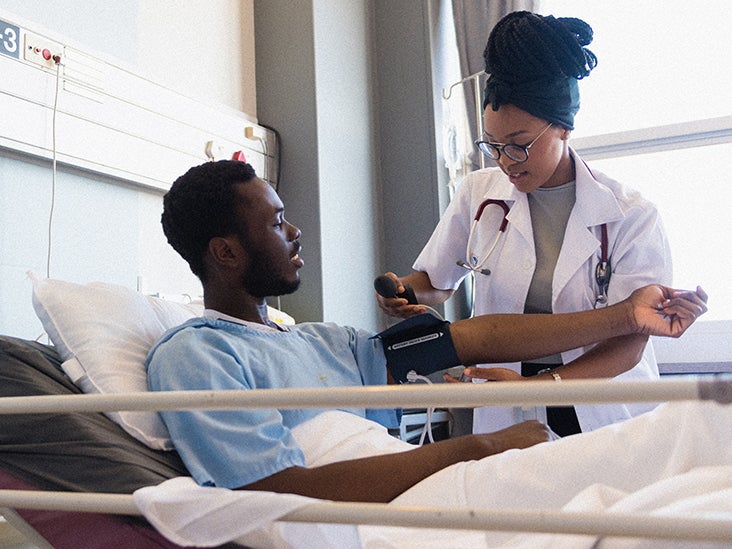 In a new study, researchers have found that the annual incidence of people requiring hospital treatment due to a hypertensive crisis — where a person’s blood pressure dangerously increases — more than doubled between 2002 and 2014 in the United States.

The research, published in the Journal of the American Heart Association, comes at a time when other have suggested people have gotten better at controlling their blood pressure, with a consequent reduction in cardiovascular events.

According to the , high blood pressure — also known as hypertension — increases a person’s chances of having a serious cardiovascular event such as a stroke or heart attack.

A person can reduce their blood pressure by exercising regularly, not smoking, eating a diet low in salt, avoiding overweight and obesity, and reducing stress.

A hypertensive crisis puts a person at risk of having a cardiovascular event. The AHA recommends that a person call the emergency services if their blood pressure is 180/120 or greater and they are experiencing pains in their chest, shortness of breath, numbness, weakness, back pain, issues with vision, or problems speaking.

Researchers that people in the U.S. have tended to better control their blood pressure in recent years and have seen a reduction in the overall number of cardiovascular events occurring.

However, the findings of a new study show that hospitalizations due to a hypertensive event increased between 2002 and 2014.

Dr. Joseph E. Ebinger, M.D., a clinical cardiologist, director of clinical analytics at the Smidt Heart Institute, and first author of the study, says that “[a]lthough more people have been able to manage their blood pressure […], we’re not seeing this improvement translate into fewer hospitalizations for hypertensive crisis.”

Dr. Ebinger and his colleagues drew on data from the National Inpatient Sample, which included information on all hospitalizations across the U.S. during the years in question.

Dr. Ebinger and his colleagues found that the annual level of hospitalizations due to hypertensive crises more than doubled between 2002 and 2014.

Breaking the data down based on sex, the researchers found that hospitalization due to hypertensive crisis increased from 0.17% of all admissions to 0.39% among men.

The overall risk of mortality due to a hypertensive crisis dropped during the study period. However, despite women tending to have fewer comorbidities related to cardiovascular health than men, they nonetheless saw the same death rates.

“Despite effective methods for diagnosis and treatment, hypertension remains one of the largest modifiable risk factors for cardiovascular disease, itself the leading killer of people globally every year.”

“For a number of years, we appreciated improvement in the overall control of blood pressure in the outpatient setting. However, less was known about the rates of extreme blood pressure levels that send people to the hospital, known as hypertensive crises. We pursued this work to see if the gains made in blood pressure control during the study period were being translated to reduced rates of admission for hypertensive crisis.”

“As the results show, this was not the case, with the rates of hospitalization for hypertensive crisis increasing over a 13-year period.”

“Our group has also been interested in differential patterns and response to hypertension between men and women. We stratified our analysis to look at differences between sexes.”

“While this is good news, the fact that women experienced similar improvements in case fatality, despite having fewer other medical conditions, indicates that there may still be an underlying physiologic difference in how hypertension affects the health of women,” said Dr. Ebinger.

MNT also spoke with Dr. Eileen Handberg of the American College of Cardiology. Dr. Handberg was not involved in the study.

“Any data that advances our understanding of health-related issues is important. The data here is important because in spite of our efforts to better control hypertension — and we are getting better at it — there is an increase in the number of people who go to the hospital with a hypertensive crisis,” she said.

“As the data shows, it’s higher in males and older patients and those with more comorbidities, which is not unanticipated. The mortality rates are not rising in this admitted population, which is good, but the impact on health care resources and costs is still expensive,” continued Dr. Handberg.

Dr. Ebinger said that there are likely to be many reasons for this increase, although precisely what accounts for it is not yet clear.

“It is important to note that this was a retrospective study, so we cannot draw causal relationships. What the data do tell us is that there are several avenues that would benefit from further investigation to better understand what may be driving these findings.”

“For example, whether the increased hospitalization rate is due to episodic high blood pressure events in individuals whose blood pressure is usually well-controlled or clustering of poorly controlled blood pressure among a subset of the population remains unknown,” said Dr. Ebinger.

Dr. Handberg also said that many factors could be at play that explain the increase in hospitalization rates.

“What [the researchers] point out that is true is that the reasons for the very elevated blood pressure is multifactorial, and they did not have access to information that might provide insight into the issues. And there is not really a good place to be able to pull all of this information together in the patient population studied.”

“However, from other work, we know that many factors like being insured, [medication coverage and availability], complexity of medical therapy — how many meds are they taking for all of the comorbidities? — so are they compliant, did they run out of meds, [are they unable to] afford them, [and] other social determinants of health [play] a role,” said Dr. Handberg.

“Clinicians should be mindful that improvements in outpatient blood pressure control may not translate to reductions in hospitalization risk, at least at a population level.”

“For patients, it’s important to pay attention to your blood pressure. Be screened for hypertension, take your medications as prescribed, and practice healthy lifestyle choices, like diet and exercise. Patients should also be mindful of things that may inadvertently raise their blood pressure, such as salt or excessive use of nonsteroidal anti-inflammatory [drugs].”

“In regards to policy, [there should be] continued focus on research and funding to adequately address hypertension control measures. This includes work focused on both understanding biologic principles, but also how best to ensure that all patients receive high quality, effective clinical care,” said Dr. Ebinger.

Dr. Handberg stressed that there was still room to improve public messaging on heart health — particularly following the COVID-19 pandemic.

“We have made progress with identification [and treatment] of hypertension, but there is a lot of room to continue to improve.”

“Weight, activity level, salt intake, and smoking all play a role in hypertension, and better focus on all of these will help patients get to goal. Patients knowing their numbers is crucial, being a part of the plan of care so the patients can tell us what their barriers are so we can try and mitigate those if possible.”

“There are lots of education and public health messages out but I do wonder if rather than having 50 messages from every group/country/public health group could we come up with something more consistent and really get that message out there. Million Hearts attempted to do that and made some great strides, but there is so much opportunity.”

“People have been so overwhelmed with COVID-19 for the last two years that many have forgotten some of the additional real threats to global health — gaining that extra 20 [pounds] during COVID-19 alone can drive up blood pressures!”