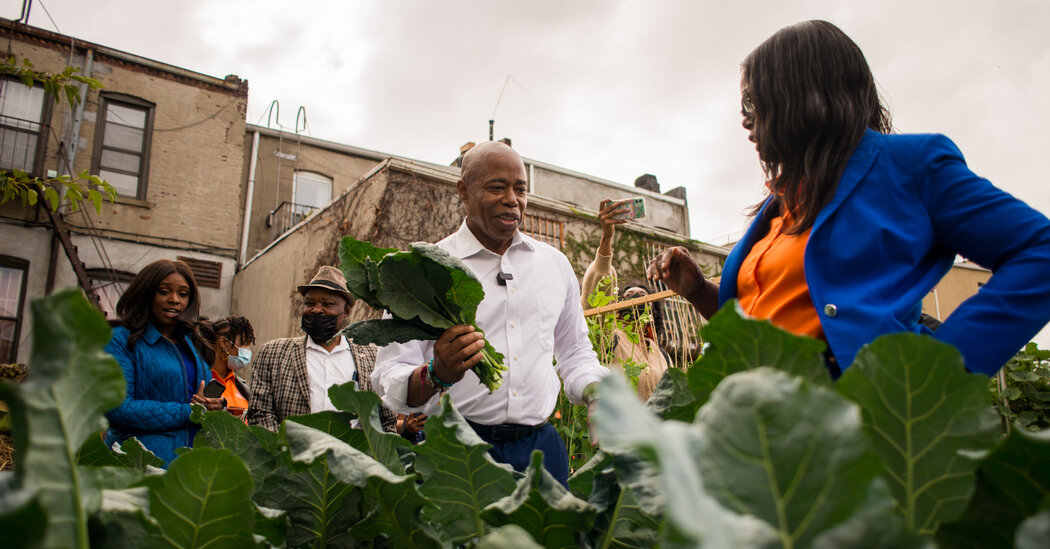 He shares a meditation mentor with Oprah Winfrey and Lady Gaga, adores books with titles like “Becoming Supernatural” and “You are the Placebo” and has tried to battle the toxic aspects of social media by leading a Twitter campaign to fight “negativity in this space.”

He is a vegan cookbook author and self-identified Virgo who is conversant with astrology, although not devoted to the practice.

And as a New York City media firestorm brewed over whether his diet is as strictly plant-based as he has professed — it is not, he would later admit — Mayor Eric Adams sat in his workout room at City Hall last week, demonstrating how deep-breathing exercises can help combat adversity.

“We all breathe incorrectly because we were never taught breathing,” Mr. Adams declared, perched on a workout bench in his socks, a white T-shirt and yellow and brown striped drawstring pants. There was a stationary bike to his right and 25- and 30-pound weights strewn around him, as he offered instruction on alternate-nostril breathing.

“My health routine helped me for this moment,” he said of his crisis-laden first weeks in office. “It’s a balance of my physical and emotional stability.”

Mr. Adams is best known nationally as a tough-talking former police captain whose centrist views on battling crime helped catapult him to the mayoralty. But he has also emerged as something of an unconventional wellness influencer — a nutrition and fitness enthusiast with hints of New Age tendencies perhaps not seen in a major political leader since Gov. Jerry Brown of California was known to some as Governor Moonbeam.

That reputation took a slight hit last week as Mr. Adams acknowledged that he occasionally ate fish, despite previous denials. The episode was humorously referred to as “Fishgate”; yet it also pointed to the mayor’s sometimes-casual relationship with transparency and the truth, following more serious controversies over residency and tax questions.

But as Mr. Adams embraced self-help language in his mea culpa — “I am perfectly imperfect” — he also again demonstrated how vastly his leadership style differs from that of his predecessors.

New York City is now run by a man who at once sternly warns against “disorder in my city” and invokes his life coach, delights in cooking demonstrations and cites the “healing powers” of spices.

If aspects of his diet are in doubt, the arc of Mr. Adams’s health journey remains central to his identity. He speaks frequently about his transformation from heavyset police officer (“It’s not a myth: cops like doughnuts”) to healthy lifestyle evangelist. Type 2 diabetes impaired his vision and threatened his health before he embraced a plant-based diet in 2016 that he says reversed the disease.

“He credits his adopting a plant-based diet to saving his life,” said City Councilman Justin Brannan. “It’s holistic to the way that he sees the world.”

Mr. Adams’s beliefs around health serve as a dominant lens through which he views many of the city’s challenges, from education to government inefficiency.

“You go agency by agency, and you watch how this malnourished approach to running our city is destroying our cities,” he said on “The Ezra Klein Show.” He added: “If we stop treating symptoms and treat underlying causes, we can turn around our city.”

The governing implications of that outlook were apparent from his first weeks in office, as he practiced meditation with schoolchildren and frequented fast-casual salad spots.

Last Thursday, the mayor signed two executive orders related to how the city and city agencies approach healthy food. Days earlier, he unveiled an expansion of lifestyle medicine services in New York, which he said was his top wellness-related priority.

And after pressing for Meatless Mondays in schools, hospitals and jails as Brooklyn borough president, Mr. Adams recently heralded the beginning of Vegan Fridays in schools — though some parents have criticized the effort for not being well thought out and appearing nutritionally insubstantial.

For personal fuel, Mr. Adams keeps a NutriBullet blender in his small City Hall kitchen. Last Monday he whipped up a purplish-brown concoction; typical recipes involve “either kale, spinach, blueberries and a few superfood powders,” he said, adding that the search for a plant-based Gracie Mansion chef is ongoing.

According to the mayor, he completes “at a minimum” half-hour, mostly in-office workouts. He spends 20 minutes each morning and evening practicing meditation, aided by beaded bracelets to facilitate focus. (He also sports a bracelet that says “hustle.”) And he has called himself a “Zen mayor” who will “bring the calmness” to the city.

“Don’t see yourself in the crisis,” he said, describing how his routine shapes his mind-set. “See yourself out of the crisis and through the crisis.”

Mr. Adams, New York City’s second Black mayor, is keenly focused on combating racial health disparities, part of his promise to battle inequality. In a book released ahead of his mayoral run, “Healthy at Last,” he also urged Black Americans to rethink soul food, casting it as an unhealthy relic of slavery.

Others aspects of the book mark sharp departures from a typical political memoir.

He offered tips like substituting jackfruit for pulled pork. He grappled with gastrointestinal issues. (“Unfortunately, people have normalized the idea of constipation.”) He advised against bragging “when you start looking oh so good.”

Mr. Adams, who is Christian, also discussed how health influenced his spirituality.

“Too often we don’t equate our better selves with what we eat or consider that our bodies are a gift from the Creator,” he wrote.

Several politicians who have known Mr. Adams for years struggled to name issues about which he has consistently been more passionate than personal health and diet, though certainly he is focused on the pandemic and public safety.

One elected official described a 2017 conversation that they had expected would center on politics. Instead, Mr. Adams spent nearly the entirety of an hourlong meeting discussing plant-based diets, recalled the official, who was granted anonymity to characterize a private conversation. Mr. Adams said that did not sound like something he would do.

Commissioner of Correction Department: Louis Molina. ​​The former N.Y.P.D. officer, who was the chief of the Las Vegas public safety department, is tasked with leading the city’s embattled Correction Department and restoring order at the troubled Rikers Island jail complex.

Chief Counsel: Brendan McGuire. ​​After a stint as a partner in a law firm’s white-collar practice, the former federal prosecutor returns to the public sector to advise the mayor on legal matters involving City Hall, the executive staff and administrative matters.

Others have detailed similar exchanges, expressing both admiration for Mr. Adams’s commitment to health and hope that he brings the same fervor to New York’s many other pressing issues.

“I bring passion to every issue that I’m in,” he responded.

That evident devotion to plant-based eating — and Mr. Adams’s repeated insistence that he does not eat animal products — turned his dietary deviations into a full-blown controversy, after several news outlets reported that Mr. Adams had been seen ordering fish.

In one such account, the mayor was accompanied by John Catsimatidis, the Republican supermarket mogul, at Rao’s, the exclusive restaurant in Harlem.

“He eats all vegetables,” Mr. Catsimatidis said in a follow-up interview. “Once in a while, he’ll eat some fish.”

Mr. Adams sought to deflect and even deny having eaten fish, suggesting last Monday morning that the fish was often for dining companions whom he was encouraging to be healthier.

By Monday evening, the mayor acknowledged in a public statement that he had “occasionally eaten fish.”

“I want to put cream in my tea, I don’t beat myself up,” Mr. Adams said in the interview, before releasing the statement. “I don’t sit back and say, you know, ‘Oh, my God, I committed a cardinal sin.’”

Some wellness-minded officials and experts say that overall, Mr. Adams sets a healthy example at the highest level of city government and is receptive to expert opinion.

“He was very willing to listen,” said Herminia Palacio, who as the former deputy mayor for health and human services worked with Mr. Adams on a plant-based lifestyle medicine initiative at Bellevue Hospital. “He has very strong personal beliefs, but I didn’t find them to be imposing or dogmatic.”

Just don’t get him going on olive oil, which he said he avoids because of its fat content, though respected major studies show it is associated with significant positive health benefits. (“The olive oil companies wrote that,” he inaccurately claimed.)

If Mr. Adams is best known for his nutritional advocacy, he also embraces the promise of meditation and hopes to make the practice more accessible through school programming.

Stressed after leaving the police force, he eventually learned to meditate with the assistance of Bob Roth, who is known for both his star-studded clientele (he has worked with Ms. Winfrey, Lady Gaga, the Seinfeld family and Katy Perry, among others) and for his work helping at-risk constituencies cope with trauma.

“There was a sense of, he really hoped that this was going to help because he had these serious health issues,” Mr. Roth said. “He’s not afraid to be who he is.”

As for astrology, Mr. Adams allowed that he didn’t regularly consult his horoscope. Nonetheless, he was still a “big believer that if you’re born at a certain time when the sun and the stars line up, that it could have some impact on your personality.”

“I am constantly evolving,” he said, preparing his smoothie. “Who I am today is not who I am tomorrow.”