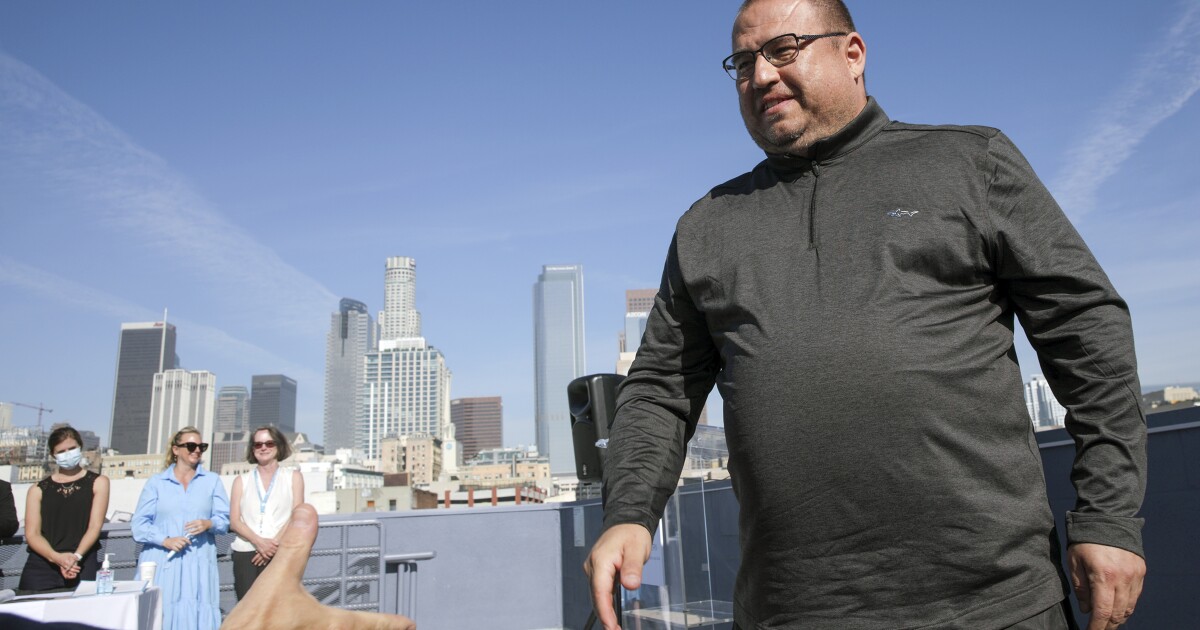 For years, a flower mart operated out of the three-story, tinted glass building at Fourth and San Pedro streets in downtown Los Angeles. But the business closed just as the population of skid row boomed.

On Friday morning something new blossomed there: the Ron Beasley Wellness Center, a drop-in center that will provide free mental health services for homeless people and low-income residents.

Homeless advocates and elected officials say the services are desperately needed for people struggling with addiction and mental illness — and who have little or no access to the treatment that might get them off the street.

“Nowhere in the United States is the need for mental health services, crisis support or addiction support greater than here in skid row,” said City Councilman Kevin de León, whose district includes skid row, at the ribbon-cutting Friday morning. “That’s why the wellness center is so critical.”

The 14,500-square-foot facility will include 10 rooms for one-on-one therapy sessions and two large rooms for group treatment. It will be staffed by 20 mental health professionals providing on-site services, with 60 more assisting on the street and in people’s homes.

The center is operated by the People Concern, one of the largest housing and social service agencies in L.A. County. Last year, the nonprofit organization had 998 people enrolled in its mental health programs.

Representatives said the figures are expected to grow now that it has more space — about five times the square footage of its old offices next to Fred Jordan Missions a few blocks away. The opening was delayed for more than a year by the pandemic.

At the ceremony, Jerry Bardo, 45, shared his experience trying to access mental health services. Two years ago, he was living on the streets, suffering from depression and anxiety. He said he tried to find a therapist but often they didn’t accept MediCal and were going to charge him more than $100 for an hour session. So he suffered without treatment.

Bardo was staying at a men’s shelter in skid row when he was referred to the People Concern, where he began receiving mental health care treatment.

“They’ve have given me tools to deal with that depression and anxiety,” he said. “My life is changing … from 1 to 10, the depression is at zero.”

Bardo has since found subsidized housing and is living in his own apartment in Brentwood. He became a Spanish interpreter, an ordained wedding officiant and volunteers at the center.

De León said mental health has been one of the most difficult aspects of homelessness to address.

He said he didn’t know if people would take to it. But if it did work, he said the next step would be to figure out how to scale it up.

Daniella Urbina, housing and homelessness deputy with Supervisor Hilda Solis, whose district includes skid row, said there are 4,662 homeless people in the area, many of them suffering from addiction and mental health illness.

Several of the speakers hope that the wellness center could provide relief as people go through the often bureaucratic process of moving into housing.

“At the Ahmanson Foundation, we’ve recognized that the permanent supportive housing model is — not only is it too expensive, it takes too long and, quite frankly, it’s not sustainable,” said William Ahmanson, president and trustee of the eponymous foundation, which donated $2.5 million to the center.

The foundation’s board members wanted to tackle something they could “do today,” Ahmanson said.

“And this project was one of those projects,” he said.

Once initial contact is made, the goal is to loop a person into a broader network of services, including housing, said Brooke Slusser, the organization’s chief program officer for mental health.

At the center, a psychiatrist will be on site four days a week, and available throughout the work week in a virtual format, Slusser said.

Across the street, Gil, a 51-year-old homeless man, sat by his tent smoking the synthetic drug spice. He said he wanted to get help for his depression and anxiety as well as housing.

The former construction worker said he’s never gone to therapy for his mental illness and instead used drugs to cope with it. The anxiety, he said, could be overwhelming.

Gil’s mental health declined after a disastrous divorce and plummeted when his father, who was the pillar of his life, ended up in prison.

“It felt like I stepped on a landmine and became amputated,” he said.

He glanced over at the center.

“I want to have stable housing and be better so I can see my daughter more,” he said. “I felt bad when she found me on the street. I felt bad whenever we have lunch and she has to come here.”

Gil said he planned to walk over to the center and see what services he could get.

“What other options do I have?”