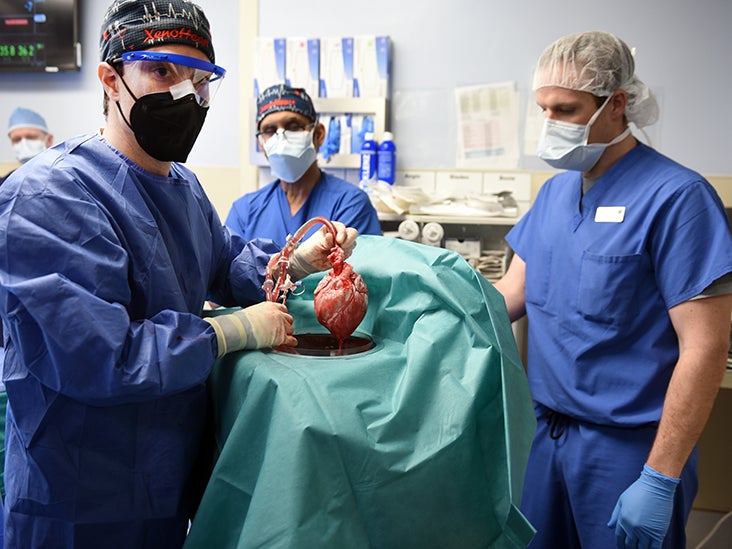 Faculty from the University of Maryland School of Medicine (UMSOM) recently conducted the transplant of a genetically-modified human heart into a 57-year-old male from Baltimore, MD.

According to UMSOM, this procedure was the first time a genetically-modified animal heart replaced a human heart and was not automatically rejected by the patient’s body.

Dr. Bartley P. Griffith, director of the Cardiac and Lung Transplant Programs and a Thomas E. and Alice Marie Hales Distinguished Professor of Transplant Surgery at UMSOM, was one of the surgeons who performed the transplant surgery.

He believes the transplant will offer new options to individuals in need of new organs and help solve the organ shortage crisis.

is the process of transplanting live organs, tissues, or cells from a nonhuman animal into a human.

The idea of cross-species transplantation is not new. Research shows evidence of xenotransplantation as far back as the when medical treatments included blood transfusions from nonhuman animals into humans.

Most recently, NYU Langone Health reported completing the second investigational transplant of a genetically-engineered pig kidney into a deceased patient kept alive on a ventilator. Scientists observed the kidney’s function for 54 hours and reported signs of expected kidney function and no sign of rejection by the human host.

Dr. Muhammad M. Mohiuddin, professor of surgery and director of the Cardiac Xenotransplantation Program at UMSOM, was also part of the surgery team. In 2016, he showing how a genetically-modified pig’s heart could survive inside the abdomen of a baboon for more than 2 years.

Dr. Mohiuddin and his team used pigs genetically modified to avoid stimulating organ rejection. They also developed an immune-suppressing drug procedure to help ensure the host body did not reject the pig hearts.

Dr. Griffin, Dr. Mohiuddin, and their team reportedly spent the last 30 years fine-tuning the surgical techniques for this transplant they conducted earlier this month.

The patient, Mr. David Bennett, 57, of Baltimore, MD, agreed to the procedure after entering the hospital 2 months prior with arrhythmia. An arrhythmia occurs when a person’s heart beats irregularly. In Mr. Bennett’s case, his condition was life threatening, and he needed connecting to a heart-lung bypass machine to stay alive.

Mr. Bennett was also not a viable candidate for the heart transplant list, and his arrhythmia made him ineligible for an artificial heart pump.

Because of the time-sensitive nature of his condition, on December 31, 2021, the Food and Drug Administration (FDA) gave the surgical team emergency authorization to conduct the transplant.

The pig heart that the surgeons used for the transplant underwent genetic modification for xenotransplantation. Dr. Griffith explained to MNT how this worked.

“Organs from genetically modified pigs have been the focus of much of the research in xenotransplantation, in part because of physiologic similarities between pigs, human, and nonhuman primates,” Dr. Bennett said.

“The donor pig had 10 genetic modifications, including the knockout (inactivation) of four pig genes and the addition of six human genes.”

“Building on the GalSafe (alpha-Gal knockout) platform, two other carbohydrate antigens were eliminated by knockout of the porcine Cmah and Beta-4-gal genes. To maintain a human-sized organ, the growth hormone receptor gene was also knocked out. Two human complement inhibitor genes (CD46 and DAF), two human anti-coagulant genes (EPCR and Thrombomodulin), and two human immune-modulating genes (CD47 and HO1) were inserted in a targeted fashion into the genome of the donor pig.”

Additionally, the surgical team used a new drug from Kiniksa Pharmaceuticals in combination with other anti-rejection drugs to help suppress Mr. Bennett’s immune system so it would not reject the pig heart.

Six days after the surgery, news reports have found Mr. Bennett’s recovery continued with no signs of his body rejecting the pig heart.

MNT asked Dr. Griffith about what the recovery process might look like for Mr. Bennett. “It is very similar to a human heart transplant in terms of rehabilitation and lifestyle as far as we know at this point,” Dr. Griffith explained. “He is on an anti-rejection medication regimen that includes an experimental drug. We do not know the full extent of the side effects of that drug.”

The UMSOM surgical team hopes this transplant will positively affect the future use of xenotransplantation to help those currently waiting on the organ donor list.

According to the American Transplant Foundation, nearly 107,000 United States citizens are currently waiting for a lifesaving organ transplant. About 17 people die each day while waiting on the list.

“We hope this will lead the way, but it is too soon to tell,” Dr. Griffith added. “The next step would be to study the use of these transplants in the context of a clinical trial. We are in discussions with the FDA on the steps we need to take to get a clinical trial underway, but that is likely a year or more away due to regulatory studies we would need to do first.”

MNT also spoke with Dr. L. Syd M Johnson, a philosopher, bioethicist, neuroethicist, and associate professor in the Center for Bioethics and Humanities at Upstate Medical University, NY, about the ethical considerations of xenotransplantation.

Dr. Johnson said that with xenotransplant experimentation ongoing for almost 60 years with many failed attempts, it is too early to call this transplant a success.

According to Dr. Johnson, in the past, most xenotransplantation research focused on using organs from nonhuman primates because they are the closest genetic relatives to humans. However, that research halted due to the unknown but potentially grave risks of transmitting viruses from other primates to humans.

“That risk still exists with pigs, both from viruses they are known to carry and transmit to humans and from possible, as yet unknown pathogens,” she added. “As we enter the third year of a deadly global pandemic caused by SARS-CoV-2, a zoonotic virus that has been found in numerous other animal species, the risks of zoonotic pathogens should be front and center as we think about proceeding with xenotransplantation.”

With the current interest in using pig organs for xenotransplantation, Dr. Johnson said while some may argue millions of pigs die each year for their meat, there is no real ethical issue about using them for their organs.

“The pigs used for their organs are quite different from those who are killed for meat,” she explained. “They are genetically modified in an attempt to prevent rejection and to eliminate some of the known retroviruses that they carry.”

“They are pigs who will live their entire, short lives in isolated, indoor, sterile facilities, subjected to infection control measures, including artificial insemination and cesarean section births. If pigs are used for multiple organs and tissues, they might be subjected to prolonged harm, including repeated surgeries, restraint and anesthesia events, painful procedures, tests, and biopsies. Pigs are intelligent, social, emotionally complex animals, and their use as organ factories would violate our current best practices in animal care and welfare.”

Rather than using xenotransplantation, Dr. Johnson urges the medical community to look at other alternatives for solving the organ shortage problem.

“One is to prevent the need for transplants by developing better therapies for the common diseases like diabetes, heart disease, and hypertension that lead to organ damage,” she said.

“Another is to accelerate research on human-relevant alternatives, like 3D bioprinting and growing human organs from stem cells. Obtaining organs from expanded criteria donors — donors who might have chronic illnesses or who are older — is already being done and can make more organs available for people who need them. Finally, we should use social engineering, rather than bioengineering pigs, to find better ways of encouraging more humans to be organ donors.”