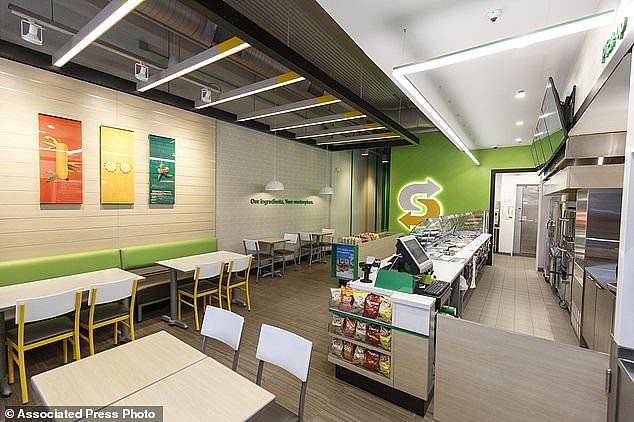 Sandwich giant Subway has closed hundreds of stores across Australia as the pandemic and changing eating habits take its toll on the fast-food chain.

That means 13.9 per cent of Subway’s stores – more than one in 10 – have closed their doors over the past seven years.

‘Coming out of lockdown, people are now focused on health and nutrition. People are more aware of what’s going into their bodies,’ she told Daily Mail Australia.

‘If you look at the fast food options you have now, you’ve got salad bars, healthy Mexican restaurants or places doing skin rolls,’ she said.

‘People want to incorporate plant-based foods into their diets.

‘Then you’ve got your fresh food delivery services like HelloFresh and Marley Spoon.

‘I’ve definitely noticed a change in our eating habits.’

Now Subway is battling to bring back customers with a major modernisation plan for its Australian stores.

A brighter atmosphere, better displays of vegetables and ordering tablets are all part of the new Subway store refits 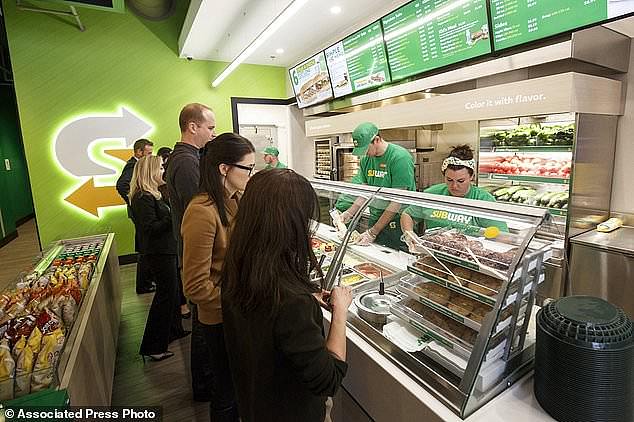 At this stage, only 35 per cent of restaurants in Australia have undergone the refit, but Subway’s banking on the changes to help grow its customer base.

‘The research tells us that consumers won’t see us in a new light until 50 per cent of our network reaches that standard,’ a Subway spokesman said.

The brand hopes to hit that target by the end of 2022.

Subway did not reveal its 2021 revenue figures to Daily Mail Australia when asked, but claims its sales figures over the summer period were the highest in six years.

Subway’s global brand has endured a series of controversies in the US in recent years, with its former spokesman Jared Fogle sentenced to 15 years in jail in 2015 after pleading guilty to child pornography charges.

Then last year, a class action lawsuit was launched against Subway accusing it of deceiving the public about its ‘100 per cent tuna’ products.

The case relies on lab testing of 20 tuna samples from 20 California restaurants – of which it claimed 19 had ‘no detectable tuna DNA sequences’. Subway has labelled the allegations ‘meritless’ and said it would seek to have the lawsuit dismissed.

WHY SUBWAY’S SALES HAVE SLUMPED

A US business consultancy expert said ‘Subway has sat on its laurels for so long’.

In 2019, Subway Australia said it was struggling to keep up with millennial food trends, with customers who would normally seek out a Subway sandwich instead choosing healthier alternatives

‘Over the past 10 years, the tastes and the palates of our Australian guests have changed quite significantly,’ a spokesman said.

Subway’s struggles have coincided with the pandemic – which led to a string of well-known Australian retail chains either closing their doors for good or shutting down stores. Lockdowns also forced thousands of workers out of the CBDs – where many Subway franchises are located.

Subway has competition from McDonald’s, Grill’d and Hungry Jacks in Australia and chains such as Jimmy John’s, Potbelly and Panera in the US.

In 2016, the tide started to turn for Subway in the US with the chain closing more stores than it opened for the first time. 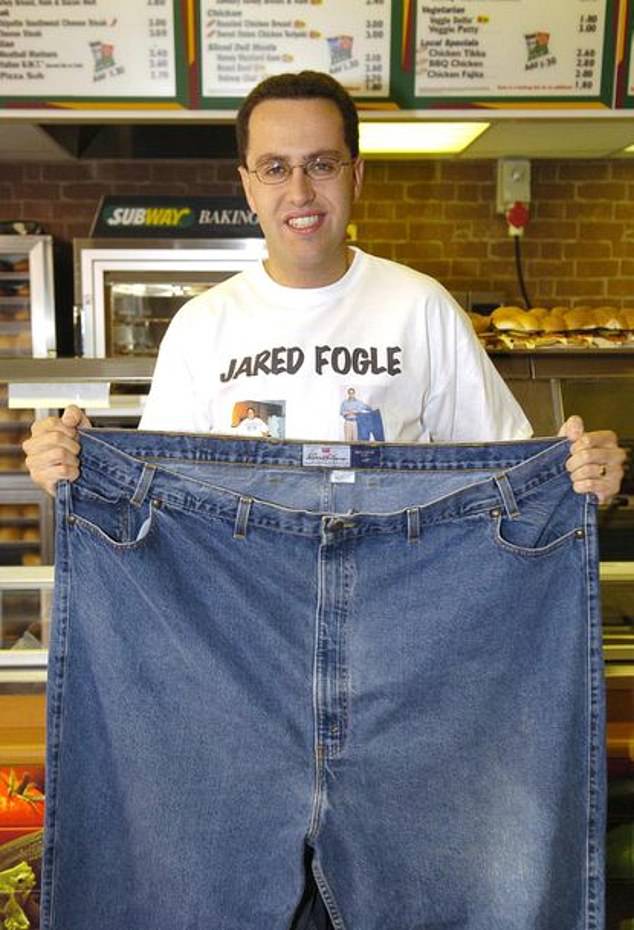 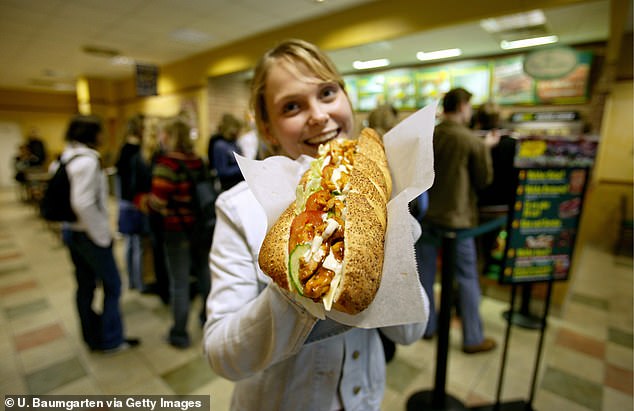 Sandwich giant Subway has closed more than one in 10 of its locations over the past seven years, with dozens of franchisees trying to sell their stores for as little as $99,000 (file image)

Similarly to Australia, an industry expert said last year American dietary habits have changed and Subway had been left behind.

‘Subway has sat on its laurels for so long; it’s kind of difficult to pull out of this hole,’ Pacific Management Consulting Group principal John Gordon told Bloomberg.

‘The sales have fallen so much in the store.’

A Subway spokesman said the brand was keeping up with changing food habits by offering vegetarian and vegan options. 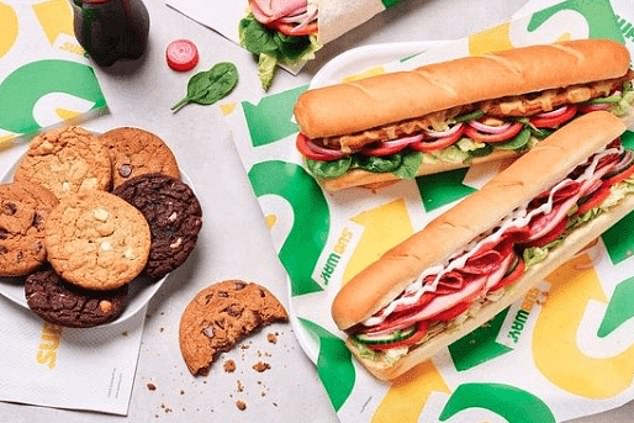 Pictured is a selection of Subway’s cookies and sandwiches. The company has started the modernisation program for its Australian stores and aims to have renovated half of them by the end of 2022

‘[Subway sandwiches] are packed with as many freshly sliced veggies as they can fit and topped with a range of proteins,’ the spokesman said.

In 2019 Subway Australia said it was struggling to keep up with millennial food trends, with customers who would normally seek out a Subway sandwich instead choosing healthier alternatives.

‘Over the past 10 years, the tastes and the palates of our Australian guests have changed quite significantly, and what they’re looking for, for their lunch or for their dinner has changed as well,’ the spokesman said at the time. 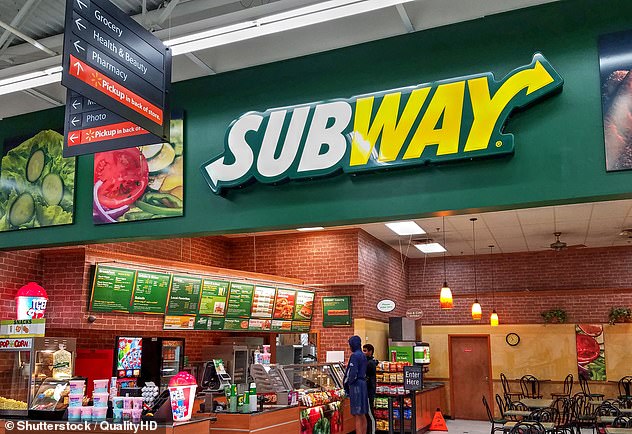 Pictured is a traditional Subway store. In 2019 Subway said it was struggling to keep up with millennial food trends

Franchisees who opted into the chain when Subway’s business was booming a decade ago spoke of their struggle to make ends meet as profits dwindled.

Some could not cover the cost of their own salary, so were forced to work for free, while others were trying their best to sell their shop.

‘I cannot afford it. I am in too much debt at the moment I have taken out a lot of personal loans to survive. If I take another loan from the bank I cannot pay as it is too high. My life is hell now. I am stuck,’ one business owner told the Brisbane Times.

On commercial real estate website BusinessForSale.com, there were 56 separate listings for Subway franchises in Australia with asking prices between $99,000 and $799,995.

Subway said it was regularly trialling new menu and customisation options to keep its customers on side.

‘Giving our guests full control of their meal is at the core of that fresh Subway experience,’ the spokesman said. 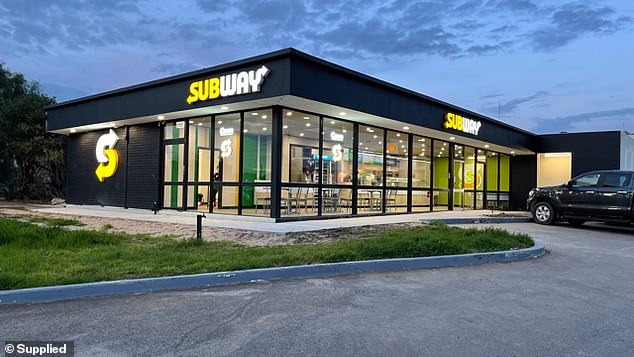 Only 35 per cent of Subway’s stores in Australia have the modernised look – which features digital menu boards, free Wi-Fi and remote pick-up areas

‘Whether guests order through the Subway app or in-restaurant, we’ll continue to deliver on our mission to provide the food guests crave, personalised to their liking and readily available.’

Subway’s battle to rejuvenate its brand in recent years has coincided with a string of well-known retail chains either shutting for good or closing down stores.

In May 2020, 167 Target stores were closed down after feeling the bite of the Covid pandemic.

Then in September of that year, Australian fashion label Colette by Colette Hayman closed more than 100 stores to save the business.

Amazon and other online retailers have forced Australian brands out of the market, spelling the end for many beloved stores.

Subway pedophile Jared Fogle has made his first communications in prison sharing his regrets at sexually abusing children – while also boasting that he’s in the best shape of his life thanks to the behind bars gym.

Fogle, 44, pled guilty in August 2015 to a child pornography charge and paying for sex with an underage girl after traveling from Indiana to New York City.

The former commercial megastar – who credited Subway sandwiches with saving his life – is showing some remorse for his crimes, but also saying he’s in the best shape of his life.

‘I really royally screwed up to wind up where I am,’ Fogle, a father of two, wrote in a hand-written letter dated November 7, 2021. ‘I was selfish and entitled.’

Fogle goes out of his way to quote famous prison film ‘The Shawshank Redemption’ in relation to his own experiences.

However, Steven DeBrota, one of the prosecutors in Fogle’s trial and a former assistant US attorney, wonders where the remorse is for Fogle’s victims.

Fogle’s ‘unwanted experience’ was not caused by ‘a single mistake or bad decision — [it was] the result of a long-standing and persistent pattern of criminal behavior,’ DeBrota said.

‘The case will always be about [Fogle’s] victims, not his prior successes in life, his latest characterization of his actions or his present situation,’ he added.

Fogle said he thinks about ‘all the people I’ve let down every single day, especially my family.’

Jared has a son and daughter, now aged 11 and 9, with second wife Kathleen McLaughlin, who divorced him shortly after the bust.

He says that he’s avoiding junk food in prison and snacking on granola and protein bars. He also claims to run four to five miles a day.

‘[I am in] the most healthy and in shape I’ve ever been,’ he wrote. ‘We don’t have a lot of control over our daily lives in prison but working out is one of the things I can control. I currently weigh 180 pounds.’

Fogle claimed to have lost some 245 pounds on his Subway diet from his heaviest at 425 pounds, and ended up making $15 million from his campaigns for the sandwich chain.

He says he spends his time otherwise watching college and NFL football, reading the New York Times and historical fiction.

‘I still love to laugh and smile,’ said the convicted pedophile. ‘ I really miss the small things like walking barefoot on carpet, sleeping on a nice comfy mattress, eating with real silverware, having access to a microwave … All I can do is learn from my mistakes to be a better man when I get released in a few years.’

Fogle, who has repeatedly fought to have his sentence reduced, wrote that he must serve at least 85 percent of his sentence.

‘I very much look forward to re-starting my life and enjoying every moment with my family who have stood by and supported me,’ Fogle wrote. ‘I’m so lucky to have them.’

Fogle gained fame for losing almost 250lbs from eating two Subway sandwiches a day and exercising. He became the face of the sandwich chain in 2000 until his arrest in 2015.

He pleaded guilty to receiving and distributing child pornography and traveling to pay for sex with minors.

Marc Brooks, who served eight months alongside Fogle a few years back and is now working in construction since he was freed, recalled how Fogle’s previous celebrity status made him an easy target among other inmates.

‘When I first got there I would make fun of him, we’d shout things like, ‘hey Subway are you going to try and get a job at Quiznos or Jimmy John’s next?”

‘After that I just kept my mouth shut, I didn’t want to go anywhere near him or his nasty sex offender buddies.

‘There’s one sex offender on the range making little stuffed animals, what’s he going to do with them when he gets out? It’s horrible.’

‘I was totally grossed out by all the pedophiles in there, sometimes you’d want to punch them, because of the disgusting stuff they would say, but I never did that, I didn’t want to mess up and get extra time, I wanted to get home to my momma and my sister,’ Brooks said.