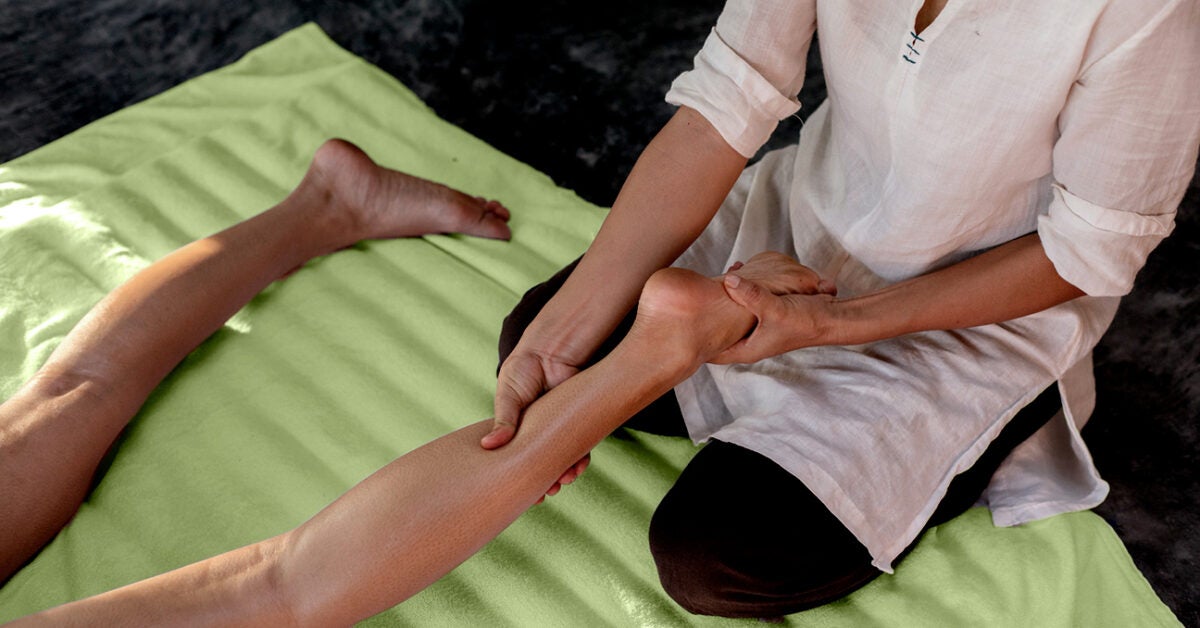 Foot reflexology is an ancient technique that involves applying pressure to specific points on the soles of the feet. Advocates believe that these points mirror the organs and bodily systems and that stimulating them promotes good health and helps keep the body balanced. Traditional Chinese medicine (TCM) reflexology is one type of this practice.

Although there are no large-scale clinical studies that demonstrate the health benefits of reflexology, some smaller studies suggest that it may help reduce anxiety, ease fatigue, and lower blood pressure.

This article looks at TCM foot reflexology in more detail, including its benefits and risks. It also suggests some alternative therapies that people may wish to try.

TCM foot reflexology is a noninvasive complementary therapy that focuses on relieving stress by working with the feet.

People trained in this technique are called reflexologists. They believe that all the body systems are mirrored in the smaller areas of the hands, feet, ears, and face. The idea is that pressure points on the feet and hands correspond to organs and tissues that standard massage techniques cannot reach.

involves applying pressure to specific points on the feet and hands that link with particular body parts. When the reflexologist stimulates these pressure points, the theory is that vital energy — called Qi in Chinese — flows through the individual’s body, reaching the corresponding area. Here, it brings the individual back into balance so that the body can heal itself.

There is no scientific evidence to explain how reflexology works. Some theories are that stress blocks energy flow, which then leads to illness. By restoring vital energy flow, reflexology maintains balance and health.

is that the human touch calms the nervous system and provides similar benefits to other forms of .

Overall, there is little scientific evidence to prove the benefits of reflexology, including TCM foot reflexology, although some studies have concluded that it may reduce certain symptoms and boost well-being.

For instance, a found that reflexology was beneficial for individuals with breast cancer. The study involved 57 individuals who received either four reflexology sessions or no treatment. The researchers found that those in the experimental group were significantly less fatigued.

A study from 2014 with 80 participants looked at reflexology for anxiety. Individuals who had undergone heart surgery the day before received 20-minute foot reflexology treatments once daily for four days or a gentle foot rub with oil for 1 minute. The individuals in the reflexology group reported a significant decrease in anxiety compared with those in the control group.

Additionally, according to advocates, reflexology may help by:

Reflexology is safe for most people and typically causes . However, people with certain medical conditions should exercise caution. These health issues include:

Although the risks are minimal, individuals should find an appropriately trained reflexologist who holds registration with the American Reflexology Certification Board or another reputable organization.

Before a reflexology session, the practitioner typically takes a brief medical history and explains what to expect. They might also ask an individual to sign a consent form.

For TCM foot reflexology, the individual removes their socks and shoes and then lies or sits down. The reflexologist will position themself by the person’s feet and assess them for any problems that could hinder treatment.

During the session, the reflexologist begins at the toes and works down the foot using various techniques to stimulate the pressure points.

A session may last for 30–60 minutes, and the person is free to fall asleep or talk as they prefer.

Some people experience physical and emotional reactions to reflexology, including perspiration, chills, tingling, and deep relaxation.

Massage involves manipulating the soft tissues using techniques such as kneading, stroking, and friction to relax the muscles. It the nerves and communicates with the brain, providing benefits such as:

After the muscles relax, the body releases endorphins that improve sleep and reduce pain.

In contrast, reflexology focuses on specific points of the hands and feet. It uses small movements to create a response in the corresponding area of the body.

Acupuncture involves the use of thin metallic needles that the practitioner inserts through the skin. Proponents of the technique that the body has hundreds of acupuncture points along energy lines called meridians. Inserting the needles at specific points helps restore energy flow. In some cases, the practitioner may activate the needles through gentle movements. Common uses for acupuncture include minimizing pain and nausea.

Acupressure the same energy points and meridians but uses pressure instead of needles. Some individuals prefer acupressure over acupuncture as it is noninvasive and does not involve needles.

Traditional Chinese medicine foot reflexology is a noninvasive complementary therapy that uses pressure points on the soles of the feet. Practitioners, or reflexologists, believe that the feet relate directly to other bodily organs and systems. The theory is that stimulating these specific points along energy lines helps restore vital energy flow and health.

Some evidence suggests that reflexology may help lower anxiety, reduce fatigue, and lower blood pressure. However, large-scale clinical trials are lacking, and researchers have not yet proven the effectiveness of this practice.

Alternatives to reflexology include acupuncture and acupressure. These complementary therapies also involve stimulating specific points along energy lines to restore energy flow and balance to the body.

Reflexology has few associated risks, but individuals should only consider treatment from a trained and registered reflexologist.