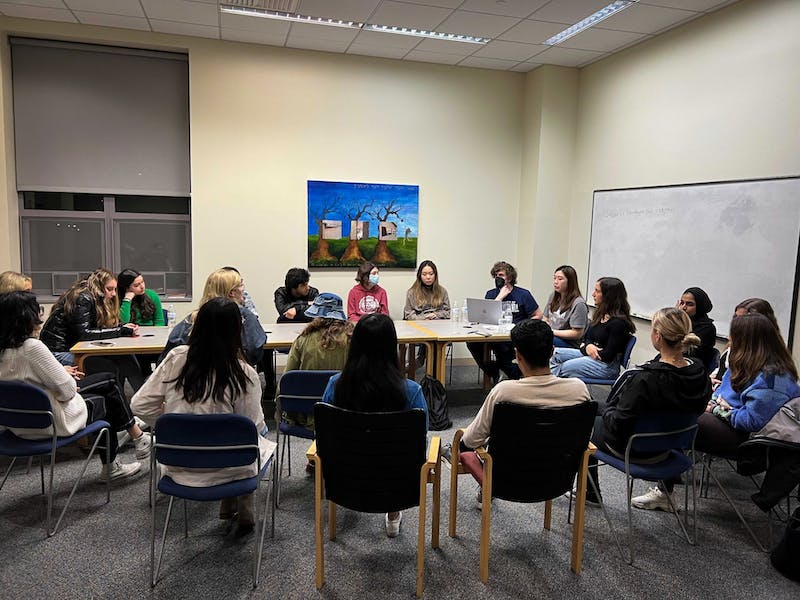 Wellness groups at Penn came together to host a night of mental health awareness and de-stressing for students on April 6.

The event, called “Be Kind to Your Mind: A Special Night to Inspire,” took place in Penn Hillel and was a collaboration between CogWell, Penn Reflect, and Active Minds. The event, which included food, games, live music, and other wellness exercises from each club, aimed to give students an opportunity to discuss their mental health in a supportive environment and decompress from the strain of daily life at Penn.

“It was an event to really work together to increase mental wellness and provide peer support,” CogWell Program Director Melissa Rice, a public speaker and mental health advocate, said.

Organizers said that the collaboration between groups played an important role in the planned activities.

“We believe that we should be working with everyone on campus to improve mental health, so that’s why we collaborated with these other groups on this important Be Kind to Your Mind event,” Rice said.

Upon entering Hillel, students were asked to sign their names and write one thing they were grateful for at a “grateful table” hosted by CogWell. Later in the night, students participated in roundtable discussions that were led by Active Minds and Penn Reflect and centered on community-based approaches to improving mental health on campus.

“I think an act as small as recognizing something you’re grateful for and writing it for other people to sign in and see was effective,” Wharton first year Allegra Wertheim, a member of CogWell who attended the event, told the DP.

Though the roundtable discussions featured many members of the wellness groups, Wertheim said that she noticed attendance from people unaffiliated with the clubs as well.

“My favorite part of the event was just seeing all of the different people who dropped by,” she said. “I think it was really impactful on a lot of people. I even talked to some people after the event and they found it a nice way to just get away from the stressors of Penn.”

Penn’s student body has experienced mental health struggles over the years, prompting action from the University and student groups to work towards increasing wellness in the community.

“Everyone realizes that mental health is an important part of caring for one’s self. However, a large complaint is the inability to do so because of the stress, competitive culture, and lack of access to [mental health] services and staff,” College first year Camellia Bui, who is involved with multiple mental wellness groups at Penn, said.

Bui added that, within the student body, there are “more competitive” spaces where students may feel the pressure to take on multiple responsibilities while always keeping a positive attitude. Several students have also experienced difficulties accessing mental health services — some reported month-long waits to get an appointment with Counseling and Psychological Services counselors.

Bui said, however, that she is optimistic that the collaboration between wellness organizations was a step in the right direction toward solving the mental health problem on campus.

Get our newsletter, The Daily Pennsylvanian, delivered to your inbox every weekday morning.

“[Be Kind to Your Mind] accomplished the goal of uniting a lot of the wellness groups. From now on, we can start taking initiative to create a larger impact,” Bui said.

“We love you guys. We want to be here for you guys,” she said. “We’d love for you guys to come feel supported and feel the connection with other students on campus and understand that there are people out here that do care about you and want the best for you.”